Silence is one of the most rewarding and enjoyable aspects of hiking in wild places. But finding moments where silence occupies, or at least quiets the everyday cacophony of our lives can be challenging.  During this week’s hike of the Bent Twig Trail I found a few quiet moments as I perched on a log in a small patch of sunshine.  I sat as still as a mushroom while feeling the warmth of the sun through closed eyes and opened ears. The silence found in natural places is seldom the absence of sound, but a quietening of the normal noises in our lives –  traffic, radios, YouTube, crowded offices, phones etc. But silence is created not only by subtraction, but also addition. Sometimes the additions create silence in the from of  alternative music. 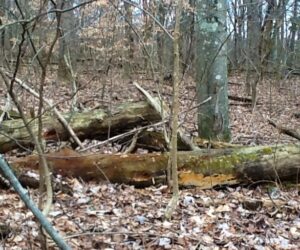 If you find a wooded trail or other natural setting, and sit still for even a few moments, the quieter notes from other creatures and features may begin to filter into your awareness.  As I sat motionless, each breeze and gust of wind sounded like a snare drum, as it gathered, soared, and subsided from the edge of the woods to my concert seat in the sunshine. Soon a downy woodpecker added sharp “peak peak” call notes, and began rat-a-tapping on a nearby tree as it searched for grubs in the bark.  A pair of Carolina wrens, perhaps perplexed by this human sitting in their territorial began scolding and singing their rollicking “teakettle- teakettle-teakettle” refrain. 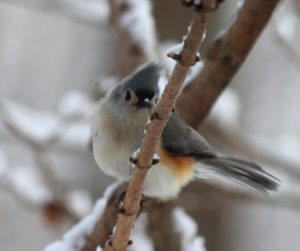 I opened my eyes, looked up in time to see a tufted titmouse peering at me with black beady eyes from the branch of a small beech tree. The titmouse was soon joined by others of its kind in vocalizing their famous peter, peter, peter notes from the feathered balconies above me.  One or two chimed in with a few nasally notes of “tsee-day-day-day”, which to my ear always sounds dissonant. After a short concert, all the birds that had gathered around me seemed to come to the consensus that I was not a threat. They moved in and out of my range as if they were of a single mind.  In the relative quiet of the woods, I could hear the distant traffic of Interstate 65, and the closer vehicular noise from Clermont Road. Despite these less musical traffic sounds, it was good to take a few minutes listening to some alternative music. I hope you have a chance to do the same.