You are here: Home / Blog / Tales from the Bent Twig Trail: Hearts-a-bursting 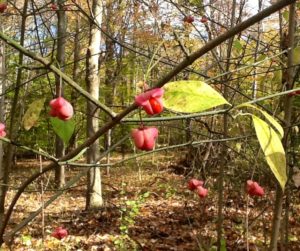 The Bent Twig Trail and other trails throughout Bernheim may have lost most of their autumn color, but vibrant surprises can still be found. Look carefully as you walk  the trail and you will be rewarded with the charms of our native eastern wahoo, Euonymus atropurpureus. The genus Euonmymus is one of 55 genera belonging to the bittersweet or Celastraceae family. The genus, Euonymus means of auspicious name, and refers to its reputation as a strong purgative and laxative in early American plant lore. Apparently these reputed uses gave rise to the common name, wahoo! However, the Food and Drug Administration in the US  banned the medical use of Euonymus in 2003 due to potentially dangerous side effects deemed to cause severe internal damage.

The eastern wahoo goes by several other common names, including strawberry bush, hearts-a-bursting, and spindletree. It should be noted that these common names are often shared with similar species in this genus. The easiest way to identify eastern wahoo is by its scarlet arils (pods) and its purple or pinkish fruits. The European euonymus (Euonymus europaeus) which is the most similar in appearance to our native species has orange arils and pink fruit.

My favorite common name for the eastern wahoo is hearts-a-bursting. Seeing its vibrant color in  the monotoned winter landscape always brightens my spirits.

You can find five or six of these spindly trees  growing in a small patch around an eight mile down the trail on your left. Happy wanderings!