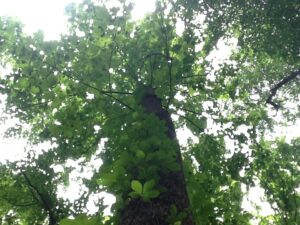 Proud but not Poplar

The tuliptree usually grows straight and tall and some might say, proud. It has many common names including tulip poplar and yellow poplar. The tree however is not a poplar but a member of the Magnolia family. The tuliptree is the largest deciduous tree in Kentucky, and we are graced  by the presence of  many of them at Bernheim. You will find some large tuliptrees on Bent Twig Trail and in several other wooded locations, including the Sun and Shade trail where especially magnificent ones tower near the snail-like sculpture by Paul Fields.

The tuliptree is the Kentucky State Tree. Formerly, this title was given to the Kentucky coffee tree partially because it bore Kentucky’s name. The wood of the tuliptree was a favorite for building barns in the early days of our region; the wood is strong and rather resistant to insect damage. The lumber of these tall straight trees have been fashioned into beams and canoes. The inner and even outer bark of young tuliptrees can be woven into baskets and cordage (ropes).  Today the wood is also used as door and window frames and interior house trim. If you’re a beekeeper, you’ll be glad to have tuliptrees near your hives, as they provide a great source of nectar for bees and other insects. The name tuliptree both describes the shapes of the flowers and the leaves.

The genus name for this tree is from the Greek lerion (lily) and dendron (a tree). The species name refers to the tulip-like flowers. 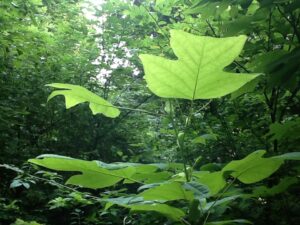 The Bent Twig Trail shows many signs that this forest fragment is relatively young, but changing in an orderly process known as succession.  Evidence of this succession is the number of downed eastern red cedars (Juniperus virginiana)  and Virginia pines (Pinus virginiana)  such as the one pictured here. In the 1960s, this area was primarily a mowed field. When allowed to grow naturally, cedars and pines began to sprout. As they grew, they produced shady cooler conditions more suitable for some of the hardwoods now found growing along this trail, and in the surrounding area. Take a moment to notice how many of these old dead  trees are now becoming part of the rich compost of the forest floor. Those that are still standing provide homes for wildlife, thus becoming a part of the living forest even in their passing. Every tale becomes a new story over time. 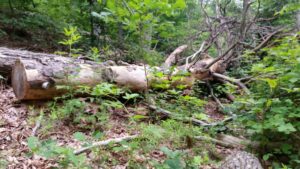