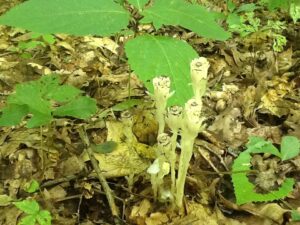 Walking the Bent Twig Trail regularly helps me experience or discover surprises that I might have missed otherwise. Look what I found – indian pipes, Monotropa uniflora! Because these strange plants are nearly all white, they are sometimes called ghost plants. Although they resemble some sort of strange fungi, indian pipes are actually flowering plants.  However, they lack chlorophyll to make their own food and must obtain nutrients in an unusual and often misunderstood way. It was assumed for a long time that indian pipes were saprophytes – plants that lived off the decaying vegetation on the forest floor. We now know that indian pipes have short roots which contain fungi. The fungi produce a web of thread-like mycelium or hyphae (mycelium is the vegetative part of a fungus, consisting of a mass of branching, thread-like hyphae) that  travel through the leaf litter and link to the root systems of conifers; on the Bent Twig Trail, the conifers are virginia pine and eastern red cedar.  Once the fungi have tapped into the sugar produced by the conifers, the indian pipes steal the nutrients as parasites from the fungi.  Karma at the ground level, or “what goes around, comes around!”

Because these indian pipes are no longer bent to resemble smokers’ pipes, which is how I’ve usually found them, I know they are older and have probably already been pollinated. The bent shape of the younger plants protects the pollen by keeping the rain waters from easily washing it away. Biologists often speak of form following function. Paying attention to how plants and animals do what they do provides layers of understanding and opportunities to marvel at the mysteries of co-evolution. 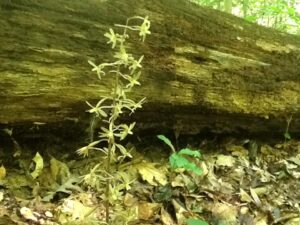 I was also rewarded today by finding a small patch of the cranefly orchid, Tipularia discolor. I seldom find these in bloom, but I frequently come across their unique leaves in the winter, spring, and early summer. These leaves appear as a single oval shape with purple on the underside and noticeable pleats.  The leaves have vanished for now (to reappear in autumn), but in their place are these little lovelies! The small flowers of this orchid do indeed resemble crane-flies.

I’m sure glad I took my walk on the Bent Twig Trail today, I might have missed these special treats that this trail offers. I hope you’ll join me next week.