You are here: Home / Actions Beyond Our Borders / Tagging Monarchs Year 2 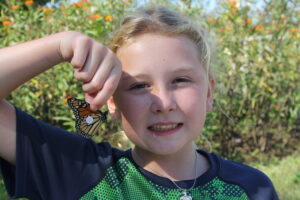 For the second year in a row, Bernheim staff tagged monarchs on their fall migration to Mexico. 100 monarch were tagged from mid-September to mid-October in the arboretum and the natural areas. Fifty-one of the monarch were males, and forty-nine were females. Olivia Belk, who is part of our education team, tagged several of the monarch that were reared from caterpillar and then released.

Monarchs are being tagged across the country to better understand the long fall migration that monarch take. There are a lot of unanswered questions about the migration like did the monarch follow a certain pathway; how do they move across the country that tagging will hopefully help to answer.

From the tagging data it has already been discovered that there are at least two migration paths: a central pathway and an eastern pathway. The monarch that take the eastern pathway normally lag behind the central pathway monarch, and are less likely to make it to Mexico. Tagging has also shown that monarch normally travel 20-30 miles per day, but can fly more than 150 miles if conditions are favorable. Hopefully, the more monarch are tagged the better our understanding of the migration will grow.