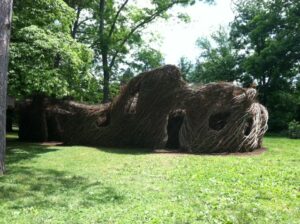 Western Kentucky University (WKU) PBS received a nomination for their film about the installation of Snake Hollow in the “Magazine Feature/Segment” category.

The Ohio Valley chapter of the National Academy of Television Arts and Sciences has members in 13 television markets (including Cincinnati, Columbus, Louisville, Lexington and Charleston) across four states (Kentucky, Ohio, Indiana and West Virginia) and continues to recognize the best in local news, weather and sports as well as accomplishments in writing, editing, children’s programming, documentaries, student productions, art design and new media.

The Emmy Awards judge entries on their own merits and do not compare entries to one another.  It is for that reason that the Emmys are unique because there can be one award, more than one award, or no awards given in any given category.  The Emmy Award, also known as the “Emmy,” is the highest award given in the television industry and it considered the television equivalent to the Academy Awards (for film), Grammy Awards (for music) and Tony Awards (for stage).  This year there were 751 total entries, a record, representing the work of more than 80 organizations.

UPDATE: Congratulations to WKU for winning the Emmy Award on Saturday, July 20, 2013.