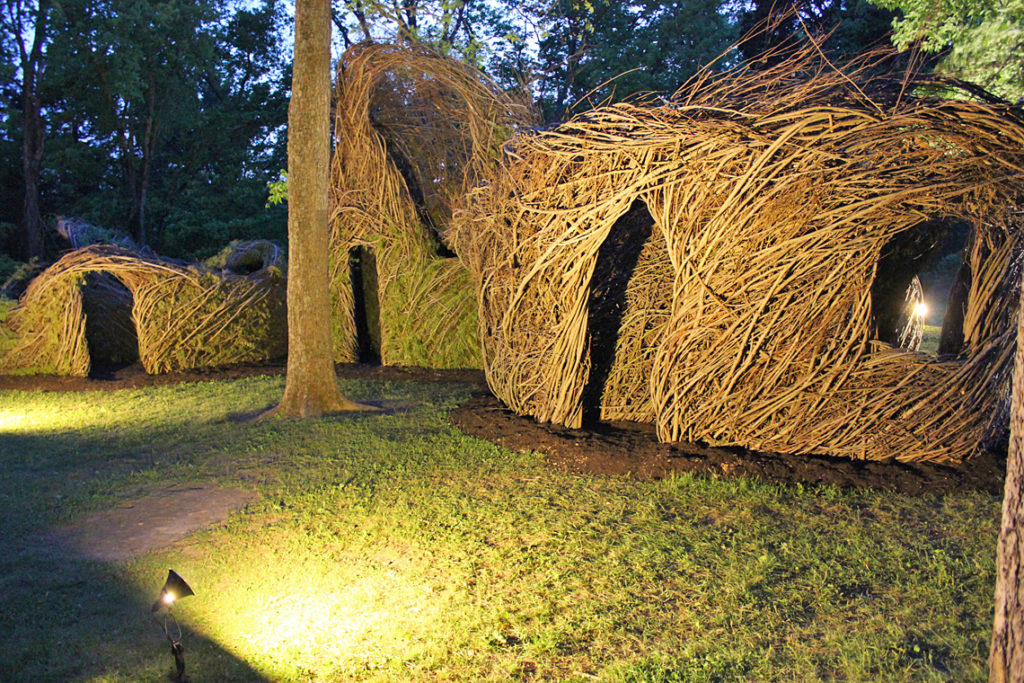 Every passerby fell under Snake Hollow’s spell. Whether it is through the enchanting doorways and windows that beckon the viewer to enter the maze-like shape and form, or its rudimentary building materials; the sculpture encouraged one to explore it in a physical way by walking in and out and around it.

Sculptor Patrick Dougherty created this site-specific sculpture to naturally relate to and play off its surroundings at Bernheim. It is made from environmentally friendly willow saplings, and the piece was eventually recycled back to the earth.  Nestled in to the meadow beside the Visitor Center, its shape was loosely based on two serpent/snake forms. Their heads were 5’ high huts standing side by side and facing opposite directions in the center of the piece, each with its coiling tail creating a spiral form with undulating walls and passageways. From certain vantage points the piece seemed to slither. 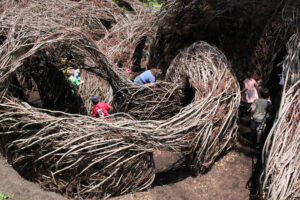 Snake Hollow was also designed to be a labyrinth or maze. It was created to have a series of meandering paths both within the bodies of the snake forms and the corridors that surround them. It is the first maze-like configuration that Patrick Dougherty challenged himself to make and one his largest pieces to date. 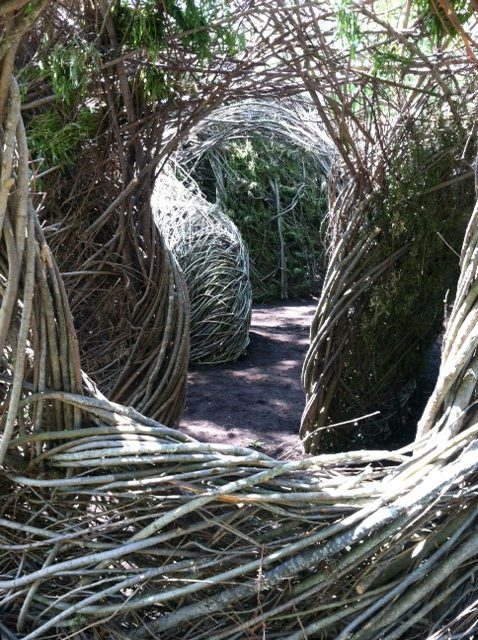 Patrick Dougherty arrived at his previously determined site with an idea in his head and a modest little sketch. He sized up the amount of collected materials and the organizational capabilities and went to work. He has developed a series of techniques for creating his work that he shares and teaches to his mostly volunteer work force. There were moments of absolute harmony

between the volunteers and the piece as they worked, gathered materials, problem solved, and wove.  Fifty-four volunteers, one fulltime assistant and the artist worked on this piece over the course of seventeen days. Bernheim staff cut, gathered and delivered willow saplings, by the dump truck, until the last twig was threaded in to place. It was approximately 846 running feet long and took over 800 hours to construct.

Snake Hollow was the inaugural work that launched Sited@Bernheim, a program presenting site specific art works on a timely basis. This sculpture was used as a source of school curriculum, entitled Weaving Science and Art through Nature throughout the course of its 2-year life cycle.

Patrick Dougherty was born in Oklahoma and raised in North Carolina, where he roamed the woods as a child.  As an adult, he combined his carpentry skills with his love of nature and studied primitive building techniques and experimented with tree saplings as construction material.  Beginning about 1980 with small works, fashioned in his backyard, he quickly moved from single pieces on conventional pedestals to monumental site-specific installations that require sticks by the truckload. To date he has built over two hundred such impressive sculptures all over the world.