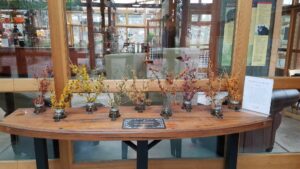 Have you ever noticed our “Seasonal Beauties” display at the Visitor Center? It highlights what’s blooming at Bernheim that week. These cuttings rotate every Friday and an information sheet can be found in the Visitor Center lobby detailing which species are featured that week.Now we’re sharing it here as well! So, enjoy the beauty, and come out to Bernheim to find these beauties throughout the arboretum.

This week there are nine witch hazel species in the spotlight for our weekly feauture ‘Seasonal Beauties’.

Witch hazels (Hamamelis) are a species of flowering plant in the family Hamamelidaceae, sometimes referred to as ‘winterbloom’ because of their bloom season which extends from October to January in some species. The genus name Hamamelis means “together with fruit”, referring to the simultaneous occurrence of flowers and fruit from the previous year. There are four species native to North America that are considered to be shrubs or small trees and can be expected to grow between 10 and 25 feet.

The specimens on showcase this week include: