Art, Music and Fun are synonymous with CONNECT at Bernheim.  This year is no different as Billy Goat Strut Revue and kRi Majesty take to the stage.  Our recent partnership with theKentucky Rural-Urban Exhange (RUX) will bring new sounds of Kentucky to CONNECT with performances from artists highlighted in this blog series.  These artists are a perfect match for one of the state’s most unique events. 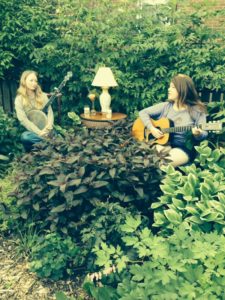 Heather Summers and Anna Krippenstapel will be performing together at CONNECT.

Heather Summers was born in Louisville, KY and raised in Columbia, KY.   She is a community advocate for food access and outdoor experiences, and has picked many weeds at farms in Kentucky, Virginia, and Washington, and at Foxhollow Farm where she currently lives. In 2013, she was awarded the YMCA Safe Place Services Volunteer of the Year for her work leading a group of youth in the Shelter House Program in activities that taught them about gardening and the joy of digging in the dirt.  She currently works as a carpenter for a small, local construction company in Louisville, KY. 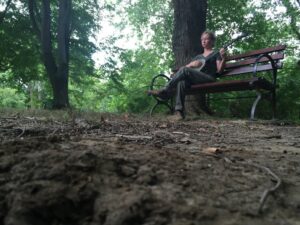 In 2012, Heather met some cool folks that played “old time” music and hasn’t looked back.  The tunes felt as though they already lived inside her, so she began playing banjo and old time guitar religiously.  A few years ago she picked up her first flat footing moves from an old timer at the Appalachian String Band Festival in West Virginia and has been known to dance from dusk till dawn.  Her most natural form of expression is to sing.  An inherently talented singer, evidenced by her 1st place win in the 2013 Morehead Old Time Festival singing competition, she’s found her voice in the sound of the old ballad and country singers, reviving the simple, hard driving voices of the past.   Since then, she’s been a member of a few bands, including the Goodbye Girls and The Other Years, and played her own songs solo whenever asked. 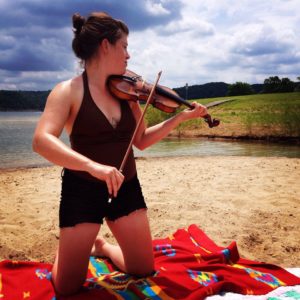 Anna Krippenstapel was born and raised in Louisville, Kentucky, where she currently works as Biologic Technician at Olmstead Parks Conservancy. She is passionate about public green space, biodiversity, protecting the urban forest and restoring the city’s ailing tree canopy. She is a certified arborist and educates volunteers for the conservancy and other non profits such as Louisville Grows’ tree planting initiative, Love Louisville Trees. Since graduating from the University of Louisville with a degree in environmental sciences, Anna has worked in organic agriculture in Jefferson County and beyond. In her spare time, she enjoys travelling to other climates from Alaska to Vermont and anywhere in between to work in agroforestry and learn about alternative modes of production.

Anna started playing violin in kindergarten and was classically trained, but now plays in The Other Years with Heather Summers, Plum Hokum, the Jonathan Wood Ensemble, and is touring internationally with Freakwater.  She has played with Vampire Squid and Joan Shelley and the June Brides, and various improvisational projects around town. She first picked up fiddle music at the Mt. Airy Festival in 2010, and shortly thereafter fell in love with the culture and the sounds at Clifftop in West Virginia.

A special thank you to our media sponsor for CONNECT, WFPK Louisville.