You are here: Home / Deep Connections with Nature / Rethink Your Lawn and Increase Biodiversity

“North America’s nearly ubiquitous domestic front lawn in particular developed as a means to display the home and, hopefully, impress the neighbors. We have dedicated millions of acres to this sterile monoculture. And for a lawn to be ‘healthy,’ other forms of life must be eradicated, drugged with chemicals that are immediately washed into our water supply, irrigated by our increasingly precious fresh water, and spewing the pollution emitted by two-stroke mowers.”
—Architect/artist Fritz Haag, “Architecture After the Front Lawn,” an essay 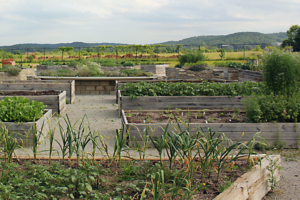 Bernheim’s Edible Garden is a living outdoor classroom created to convey Bernheim’s research mission. It was designed to be inclusive and accessible, and it integrates all of Bernheim’s expertise in one location: Horticulture, Natural Areas, Research, Art, Education and Experience. As an applicant to the Living Building Challenge (LBC), the Edible Garden meets the most rigorous green design standards in the world, following the principles of Regenerative Design — supporting Bernheim’s efforts as a leader in ecological stewardship.

As part of the Edible Garden’s mission to demonstrate Regenerative Design principles, Natural Areas Research Coordinator Kelly Vowels just completed a nearly decade-long continual assessment of the garden’s diversity and published a 42-page documentation of her scientific findings. Her baseline? What had been essentially a patch of grass with nearly no biodiversity. 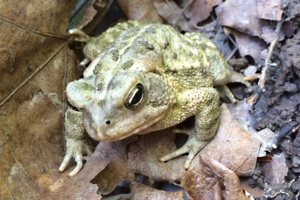 When scientists assess an area’s biodiversity, they look at both species richness (how many different species there are) and relative abundance (the number of organisms each species has). The tools were few and simple: walking areas designated as quadrets so that there would be some consistency in the observations, taking notes, and doing photo documentation with follow up identification of species she didn’t immediately recognize. She tracked mammals, birds, reptiles, insects, arachnids, amphibians, and crustaceans, as well as fungi.

She observed dramatically growing biodiversity from the garden’s first year as it developed, with increases in both the population size and the species diversity. Butterflies and moths were among the biggest increasing populations, growing from 25 species in 2012 to 64 last year. Among these were species like the gulf fritillary butterfly and the Ocala skipper — both much more common further southeast and which she hadn’t seen anywhere else in Bernheim. Only one species of spider was found in 2012 compared to 19 in 2020.

“We saw a lot more pollinator species — bees, moths, butterflies” she said. “Every year you saw them increase. When they put the milkweed in, the monarchs went crazy — if you want to see monarchs during migration, this is the place to come.”

What was the most important lesson of nearly a decade of counting species and tracking data in the Edible Garden? For one, it was irrefutable proof of what you shouldn’t do in your yard.

“It’s a great opportunity to demonstrate that lawns are dead zones when it comes to ecology,” she said. “Most lawns are nothing but one species of plant – grass – and we don’t even allow it to get to flower and seed stage, which is what would attract anything. I try to convince people they need to plant more trees, shrubs, pollinator-attracting plants. Even an abandoned lot has more value than a lawn does.”

Although Vowels has a natural sciences background with a master’s in biology, she said assessing biodiversity is something anyone can do, and encourages everyone to try to do one in their own garden or neighborhood, especially if they’re improving the space with pollinator plants, water sources or other features that attract wildlife.

“Timing is important, and you want to do it at multiple times during the year. Anybody can do it – it’ s simply a matter of counting what species you’ve got and identifying them. There’s plenty of apps that will identify things for you — my favorites are iNaturalist and eBird, and BugGuide. Just take good pictures!”

Kelly Vowels’ full research PDF can be requested by email.