You are here: Home / Blog / Purple Martin Colonies at Bernheim: They're Just Like Us

About a month ago, I joined Bernheim’s Volunteer Naturalists for a training on the purple martin colonies at Bernheim. It was led by Larry Melcher, the president of the Purple Martin Conservation Association, and the man who brought these wonderful birds to Bernheim. The training included details on how to identify the birds by sight and sound, their history, and a hands-on experience on how to check the nests and what can be observed. While checking the purple martin houses near the Education Center, the group noticed a few nests with babies that were about to leave the nest, or fledge. Larry held one of these fledglings in the air, inspiring it to leap off and take flight. Once the young martin left Larry’s hand, it extended its wings and tested them out. The little bird bobbed up and down through the air. Immediately, the well experienced adult flyers joined the new flyer. They surrounded the fledgling to ensure its safety, sometimes popping it up from underneath to bolster the fledgling when it was struggling. 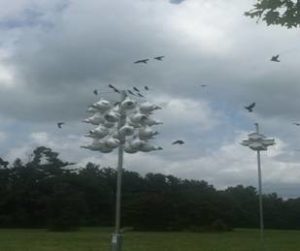 While observing these birds interact, I felt an overwhelming sense of similarity between human and purple martin communities. The adult purple martins bumping the young ones in the air was akin to a parent pushing and holding the back of a child’s bike for their first ride on two wheels. I also recognized the sense of a strong and healthy community between these birds, they were benevolent and devoted neighbors. The adult birds fluttered in circles around the houses when we came out to check the nests and vocalized to reassure the babies that they were not alone.

The purple martins had a rather soft and calm call when we were present, which indicated that they did not feel threatened by our presence. Many years ago, a behavioral shift occurred in the eastern purple martins that are believed to be associated with the Native Americans hanging up dried, hollow gourds that provided a secondary cavity for them to make a nest. Hence, purple martins are now completely dependent on human supplied housing and fairly comfortable with people. The martin houses that we checked were not just a location for the martin’s nest but also their home, or summer home. The same group of purple martins will usually return to the same nest in the spring year after year. During the fall and winter, the purple martins migrate to South America and return north during the spring to breed. By this time of year, the fledglings have grown into adults and are preparing for their upcoming journey.

About ten years ago, Larry asked why Bernheim had not setup any purple martin houses. As a result of that simple question, Larry became Bernheim’s Purple Martin Landlord. These colonies are located on the north end of Lake Nevin and below the Education Center at Arboretum Drive. The houses assist the purple martins in the struggle for survival, as well as enable Bernheim staff, volunteers, and visitors an opportunity to witness a segment of the purple martin’s life cycle. Ultimately, the purple martin’s presence is a prime example of connecting people with nature.