I stole the title for this post from the 1987 movie starring the late John Candy and it serves as a good foundation for a short story about Limestone Springs. When choosing land for the forest that bears his name, Isaac Wolfe Bernheim wanted an area accessible from Louisville by automobile, he hoped to have a landing strip constructed so that visitors could make the journey by plane, and he wanted a train station nearby to bring both passengers and supplies to the forest. 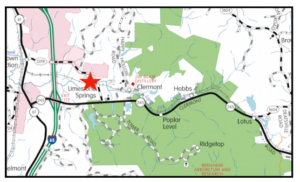 The road for the automobiles was KY 61/Preston Highway coupled with Poor Farm Road (now KY 245). The airfield for visitors to land, one of Isaac’s early plans, was deemed to be impractical and was never constructed. The Limestone Springs train station, previously known as Chapeze Station, provided a convenient location for both passengers and freight, since it is only about .7 of a mile from the entrance to Bernheim Forest. The train line from Bardstown to Bardstown Junction, just south of Shepherdsville, was built in 1860 and connected Bardstown with the Louisville & Nashville (L&N) rail line that had been completed just one year prior. 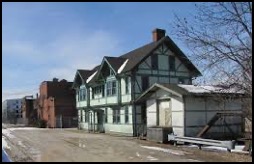 The station at Limestone Springs was in operation for many years because its primary customer was a nearby distillery. In 1867, the Chapeze brothers, Ben and Adam, built a bourbon distillery whose primary brand was Old Charter, a bourbon now produced by Sazerac. In 1890, the distillery was sold to a Louisville distributor and it remained in operation until prohibition (1920-1933) caused it to be shut down. After the repeal of prohibition, Schenley purchased the property and produced bourbon there again for several years. For a time, it appears that some of the Bernheim Brothers signature label, I. W. Harper, was distilled there. The Bourbon Museum in Bardstown has a reproduction I. W. Harper bourbon barrel head marked Limestone Springs in their collection. The old distillery and train depot property is now owned by Suntory Holdings, which also owns Jim Beam.

Though the Bernheim Foundation never owned Limestone Springs, for a time it did own the property around it, In 1949, the Bernheim Foundation purchased the 152-acre Chapeeze farm. Later that year, the Foundation sold all but the 12 acres they needed for a buffer zone for the forest on the north side of KY 245. The Foundation made considerable use of the train depot as it brought in much of the material needed to prepare the forest for openings, as well as passengers that arrived to work in the forest or to visit there.

Returning to the John Candy connection, he would have been quite familiar with the location. In 1980, he was in the area to be part of the filming of the movie Stripes. Limestone Springs served as the stand-in for the Czechoslovakian border crossing in the movie.

Stripes became a hugely popular movie and helped launch or give a boost to many careers including John Larroquette, Conrad Dunn, Bill Paxton, John Diehl, Sean Young, and Judge Reinhold.

“That’s a fact, Jack.”* The buildings at Limestone Springs can easily be seen from the road, but it is private property so be mindful Consider driving by on your upcoming visit to Bernheim Forest.

*From the basic training graduation scene at Fort Knox and one of the best-known movie quotes of all time. All film photos courtesy of Columbia Pictures.