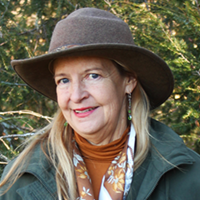 Visitors to Bernheim get to experience many wonders, from trails through its vast forest to the Edible Garden and of course the Forest Giants. But not many visitors get to have personal encounters with our expert staff to learn their stories. That’s why we’ve created Pathways to Purpose, a series of interviews with Bernheim staff by Director of Education Kristin Faurest. This week’s conversation is with Interpretive Programs Manager, Wren Smith. 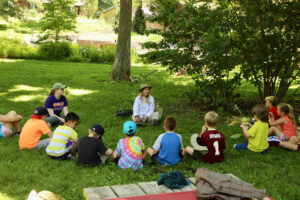 What was your experience with nature growing up?
I grew up in Shelbyville. I had grandparents who lived on farms, an aunt and uncle nearby, and cousins who lived on a farm — all family reunions were on a farm. Lots of summer weekends were spent on somebody’s farm somewhere, following creeks, finding peppermint and fossils and getting in trouble because we took off longer than the parents thought we should be gone. All the neighborhoods I lived in had wild thickets and wild places around them. Of course, when you’re a kid, any weed lot becomes a wild adventureland, and I would find these places. I was a kid who liked solitude. There were four of us in the family and we played together well, but I would be the one most likely to take off and go exploring.

How did you first learn that there’s such a thing as a naturalist — and what were the obstacles you faced?
I just remember having this vague but powerful memory about visiting Bernheim and seeing adults excited about the things I loved as a kid and finding out some of them got paid for that!

I talked to my high school guidance counselor about being a ranger or a naturalist, and he said there were no jobs in the outdoors for women. He recommended that I be a teacher and take kids on field trips, and that Eastern Kentucky University would be a good place to prepare for that. It was the beginning of my sophomore year when my professor, Dr. Rudersdorf, was showing a film of an elk migration off the Olympic peninsula, and I had one of those moments where you get goose bumps, and you know something inside of you is calling out for a change – now or never. So, I went up to him after that film and told him, I’m an elementary education major and I don’t want to be the teacher taking kids on a field trip – I want to be at the place where field trips go! He told me that EKU offered a wildlife management program so with his encouragement, I switched to biology and wildlife management. There was only one other woman in that course. I ended up working at Otter Creek, and later at Blackacre and at a youth hostel in Brunswick, Georgia which was the best summer of my life — geodesic domes in the middle of a palmetto forest! The experience was important because I met the people who ran Wilderness Southeast, which led canoeing and camping trips through the southeast. Then I went back to work at Otter Creek, then the Kentucky Foundation for Women, which provided a lot of great experience with eco-feminist writers. Nature allows us to be our most authentic selves — so seeing women who were very stressed coming on retreat and watching their shoulders soften and seeing them tune into nature and what a difference it made, what they were able to reveal, the playfulness, the need to grieve — it was a very intense experience. 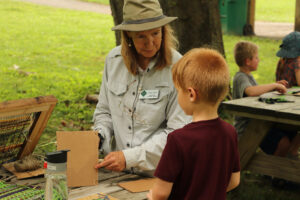 What would you say to someone facing a barrier like that — there’s no one in the field who looks like you?
Sometimes you have to carve your own path. There won’t be a path laid out for you the way there is for some people. Pay attention to your intuition. Be aware that there are people who will help you. What if Dr. Rudersdorf had just brushed me off?  I’d tell anybody who is wanting to be in a field where they aren’t reflected that they can BE that change! Just by your presence in places you can put that notion in other people’s heads that you have a place there too. And a certain amount of stubbornness is good.

What brings you the most joy in what you do?
Working with our Volunteer Naturalists. To me, it’s like they’re a part of nature. I probably take the same joy in watching them unfold as I do watching a spring wildflower pop up and reveal itself. There are many things that give me joy, but that has been the most joyous aspect of my life, not just of work. Watching them work with visitors — the ripple effect of watching the visitors have a great time because the volunteers took the time to show them something. Being surrounded by beauty and kindness is a good thing that I have in abundance and don’t take for granted.