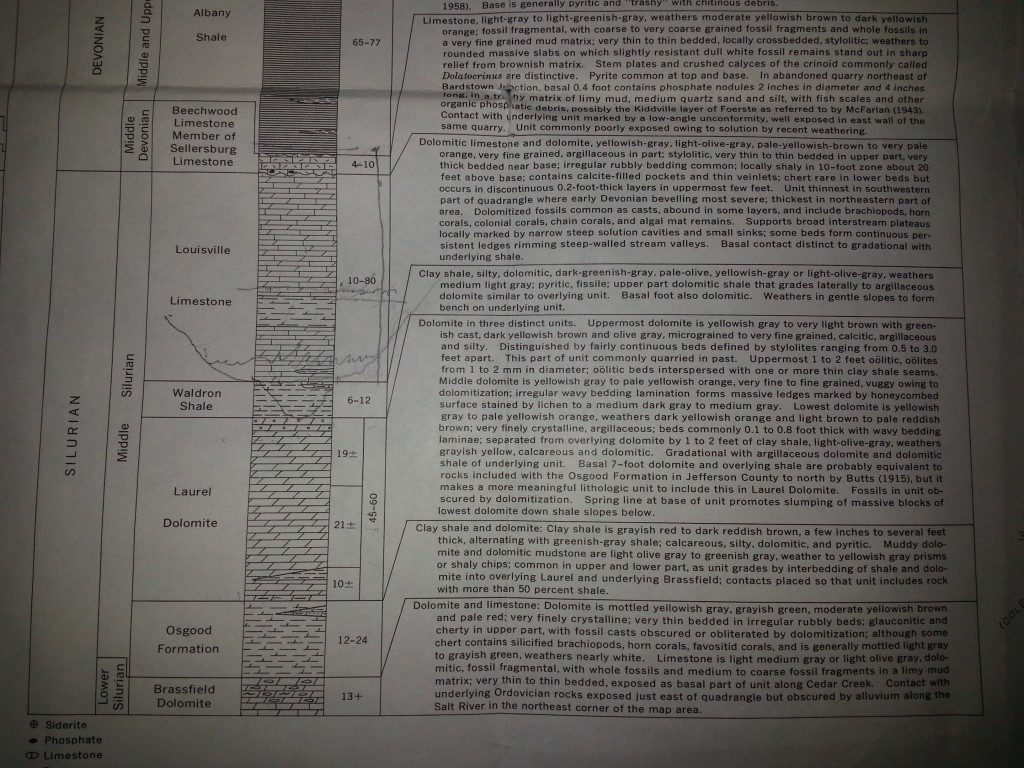 Portion of geological map of the Shepherdsville quadrangle, Billitt County, Kentucky, showing the formation layers expected at the drill site.

Day one, hour one of my food works internship at Bernheim put me right in the thick of one of the main objectives of my time here, helping assemble documentation for certification of the Edible Garden through the Living Building Challenge. Water well digging was a lesson in geology. A site was chosen just off Arboretum Drive near Holly Pond.

Background: Geologists Kurt Mason, Alan Goble, and Paul Howell agreed on this spot because this area is in a valley along a well-developed drainage line and underlain by the permeable Louisville Limestone over relatively impermeable Waldron Shale. The Shale creates a container for the fresh water that runs down the valley when it rains and then trickles though the limestone. The Limestone is exposed in the road cut on the left side as you head to the Visitor Center just across from the pond. The geologists point out that you can see a well-developed “plumbing system” of karstic fractures, and bedding planes openings.

The Edible Garden sits at a higher elevation, above New Albany Shale, which creates an impermeable cap for water to run off, heading down to the valley. Though the geologists offered that a well could be dug at the Garden site, it would have needed to be much deeper than one in the valley. Because it would possibly be dry part of the year, it ‘s very likely that the water would have been brackish to salty. Given these factors it was decided that running piping from the higher quality source was the best option rather than digging directly in the garden. Rock Drilling Inc. started setting up only minutes after I arrived at Bernheim and only went down 28ft when they hit water. Success before lunchtime!

A solar powered pump will soon be placed in the well to provide water to a 4000 gallon above ground holding tank in the garden. This tank triples the capacity of the existing garden cistern below ground. Another solar powered pump placed in the cistern will provide water to each of the four petal sections of the Garden’s raised beds. This is in addition to the existing hand pump at the center of the Garden, a favorite feature of our younger visitors. A water source at each petal will leave our head gardener, Cole, more time to plant, tend to the health, and development of the Edible Garden rather than hauling water by hand.

This well is a key element of the Garden’s irrigation system design for the Living Building Challenge. Certification under this program requires net zero water use and respects the natural hydrologic flow. I learned a lot on my first day at Bernheim and thought I’d share it with you fans of the Edible Garden!