You are here: Home / Blog / Nature's Notebook: Salt vs. The Forest 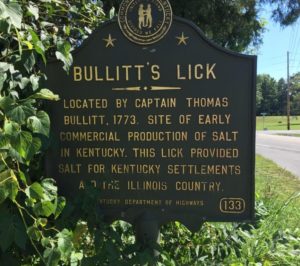 Salt has been of immense importance throughout the history of civilization. This was certainly true in this area and the history of salt production is an essential part of the story of Bernheim Forest.

The importance of salt to the early settlers lay primarily in its use in food preservation. With no source of refrigeration in those years, salt was needed to cure pork, beef, wild game, and fish for storage. It was also used in pickling and brining and in the tanning of of hides.

Salt production in our area dates back to the late 1700’s. The location of salt licks was well known to Native Americans in the area. Salt licks attracted great numbers of animals including bison, elk, and deer who came to obtain the minerals essential for their diet. The section of the Wilderness Road just north of the Bernheim boundary that connected the Bluegrass region to the Falls of the Ohio followed the paths created by these animals in their travels to the licks. These salt licks were the favorite hunting grounds for Native Americans, explorers, and settlers. In 1774, Colonel William Christian obtained 1,000 acres around an area that came to be known as Bullitt Lick, approximately 4 miles west of present day Shepherdsville. This land was leased to a number of individuals who produced salt for sale throughout the region and beyond. Other salt licks in the area also had commercial salt production operations including Long Lick and Dry Lick near Bernheim’s northern border, Parakeet Lick near Shepherdsville, and Mann’s Lick near Fairdale. The Salt River (originally Salt Lick River) was named for the numerous salt licks in the area. 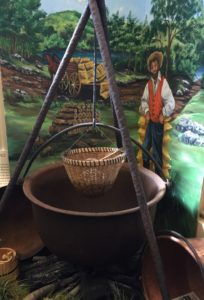 Producing salt at the licks was a process that required a great number of laborers and a large amount of wood for fuel. In simple terms, water with a high salt content was obtained from wells near the licks. It was then boiled in large cast iron kettles for two days until salt began to form. Typically, 300 to 1,000 gallons of water were needed to produce a single bushel of salt. Salt production involved hundreds of workers, many of them slaves, in the tending of the kettles, digging of wells, and many other tasks. Most important to the history of Bernheim Forest was the cutting of trees for transport to the salt furnaces to be used as fuel. An acre or more of old growth forest was felled every day to supply the furnaces at Bullitt Lick alone. Salt production and the associated deforestation continued for over five decades until the introduction of steamboats and railroads in the 1830’s allowed the import of salt from the east coast and from Louisiana where it could be produced more economically. Salt production did resume for a time during the Civil War to profit from the disruption of supplies due to the fighting.

Despite the enormous loss of trees to provide fuel for salt production, It was not the only major driver in the deforestation of the area. In a future article I will discuss the other major factors in this destruction.

In researching the material for this article, I have drawn heavily on the research efforts of the Bullitt County History Museum and, in particular the work of Charles Hartley and David Strange, a long time supporter of Bernheim Forest. I am indebted to these gentlemen for their work and their generous agreement to allow me to use their research for this piece. I would urge anyone in the history of this area to visit the museum, located in the Bullitt County Courthouse in Shepherdsville, and to visit their excellent website.