You are here: Home / Blog / Nature's Notebook: Is Bernheim an Old Growth Forest? 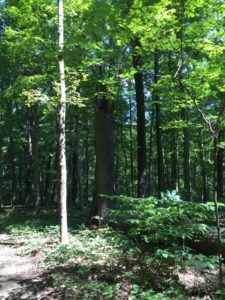 While talking with Bernheim visitors in the fire tower, the most surprising piece of information for many is that the forest we see did not exist before Isaac Bernheim purchased the land in 1929.  The forest that existed before the arrival of settlers from the east had been gone at that time for well over one hundred years.  The story of how that old forest disappeared is a fascinating one that I will address in a future post.  But, what was that old growth forest like and how did it differ from the wonderful forest we have now?

The most accurate answer is that we don’t fully know.  Descriptions of the forest land in the area at the time of the arrival of settlers are sketchy and incomplete.  Still, we are able to make some reasonable assumptions.  First, it is helpful to understand what an old growth forest is.  There are multiple definitions to be found for this term and they are at times in conflict.  There are also different definitions for different types of forest, adding to the confusion.

To simplify matters, I will offer a standard that includes the most commonly agreed upon points.  An old growth forest is one that has been mostly free from the interference of humans for at least 150 years and is composed of trees of mixed ages but includes many old trees of large diameter, numerous fallen trees ( including again those of large diameter) and many standing dead trees (stags).  Such a forest provides an ideal environment for numerous animal and understory plant species.  A forest that meets this description certainly existed on the site of Bernheim Forest in the 1700’s and earlier.  It would have been a healthy and vibrant home for a variety of animals now absent from this area and would have seen many Native Americans who lived in the area or traveled through it.

The current Bernheim Forest landscape is primarily composed of trees which grew in the 87 years since Mr. Bernheim purchased the land, it does not meet that definition.  But, does it resemble of what existed in that earlier time?  Yes, but not entirely.  Forests change in composition as they age, a natural process called forest (or ecological) succession.  As such, our forest is in a relatively early stage in this process.  In addition, the mix of trees has changed due to diseases which have caused species decline and loss. The loss of the American chestnut tree due to chestnut blight fungus is the best known example in this region.  Additionally, it is unlikely that either the American bison or elk will roam through the region’s trails as they did in the past. Nor will the now extinct Carolina parakeet or passenger pigeons be returning to the forest. 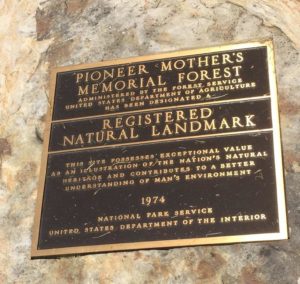 To learn more about what the forest used to be, it would be useful to visit an old growth forest in the area.  The two most significant remaining old growth forests in Kentucky are Blanton Forest, about 2,350 acres on the southeast slope of Pine Mountain in Harlan County and Lilley Cornett Woods, 540 acres Whitesburg in Letcher County.  Both forests have considerable differences in geography to this region, so neither would be a close match for Bernheim.  The best, closest match is probably the 88 acre Pioneer Mothers Memorial Forest near Paoli, Indiana.  My recent visit there confirms that this forest does indeed fit the textbook definition of old growth and includes very large oak, hickory, maple, and walnut trees.  This forest has a single trail of moderate difficulty that is well maintained.

I hope you have the opportunity to visit one or more of America’s remaining old growth forests.  In the mean time, please come and explore the beautiful maturing forest we have here at Bernheim and enjoy its many wonders.