You are here: Home / Blog / Nature's Notebook: A View from the Firetower 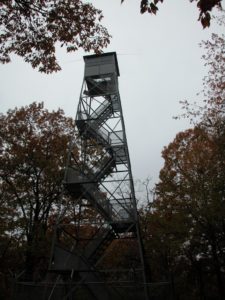 For the past two years, I have been privileged to be a frequent guide for visitors to the Bernheim fire tower.  It is a role that I requested soon after I started my training in Bernheim’s famed Volunteer Naturalist program.  I was fortunate to have been selected and have enjoyed every one of what is now the over 100 days I have spent in the tower.

The fire tower is in many respects the center of the forest and of the story of how this special place evolved and matured to become what it is today.  When Isaac Wolfe Bernheim purchased this land in 1929, it was almost unimaginably different from what it is now.  If you visited back then, you likely would have shared the view of many in the area who saw only folly in his project.  You would have found a nearly barren and deeply scarred tract of land with little to suggest its potential.  A relatively few scattered trees would offer no hint of the glorious forest that would lay here in the future.  The remains of several farmsteads and the scattered piles of iron ore would offer clues to its recent past but no clear road to what lay ahead.  The rather mundane landscape of the several hundred acres near the entrance would not in any way resemble our present beautiful arboretum with the ponds and a prairie that have been created.  Your observations in 1929 would offer faint hope of a future as the treasure it has become for our enjoyment or of the forest’s status as a nationally recognized resource.

The year after he purchased the land, Mr. Bernheim directed that a fire lookout tower be built.  It was constructed to protect the forest that, at that point, only his vision could see.  The tower was made by the Aermotor Windmill Company and shipped in pieces by train from its factory on the outskirts of Chicago to nearby Shepherdsville, KY.  It was then loaded on trucks and transported to its current location where it was assembled. 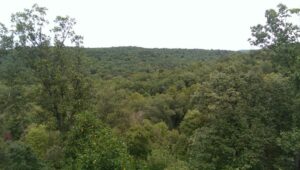 From our vantage point in that tower, 48 feet above the second highest knob in the forest, there is much to see.  Visitors can see the vast forest, the unique geography of the knobs region, and get a hint of what only Mr. Bernheim’s extraordinary vision could see 87 years ago.  With our knowledge of a bit of history and our imaginations, we can also see other things.  We can look back to the time before the Revolutionary War and see the expansive old growth forest that covered the area for hundreds of miles in every direction.  We can get a glimpse of the great numbers of deer, elk, and bison that once traveled the paths they had worn over millennia to the salt licks near here.  Perhaps we can gain some understanding of the lives of the Native Americans who frequented this area to hunt these animals and who depended on them for nearly every aspect of their lives.  With a further refocus of our vision, we can see the early European settlers who came in the years after the Revolutionary War to make their homes, farms and businesses here.  Along with many of these settlers came enslaved African American who would do much of the hard labor required in those homes, farms and businesses.  Then, refocusing yet once again on a time a bit more than 100 years after the arrival of those settlers, we can watch as the land begins to be transformed once again, this time at the direction of Mr. Bernheim, and set on the path to the forest we now have.

I hope you will find time to come and pay a short visit to the tower with myself or one of our other guides.  We will be able to share a vision of this special place and together gain a greater appreciation for the natural world we inhabit.  In future postings, I hope to share more of the view from the tower, both of the present and of the past.

Ken Johnson grew up in the plains of South Dakota where he enjoyed exploring the natural world around him. After serving in the Army, he moved with his family to rural Hardin County, KY. He has been a Bernheim member for 20 years and entered our Volunteer Naturalist program in 2015.