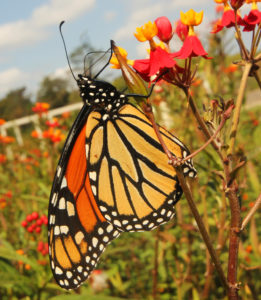 Monarch butterflies have captivated imaginations and inspired creativity for generations. They are the creatures of lore … light as a feather, strong enough to travel thousands of miles using only their paper-thin wings.

Monarchs are one of the many creatures that Bernheim researches – one of the distinctions that qualify us as a Research Forest.

Bernheim and other research facilities we are working alongside have learned a lot about monarch butterflies, such as they are the only known butterfly to make a two-way migration like birds do. Their migration is normally triggered by environmental cues like decreasing daylight, cooling temperatures, and aging milkweeds, and other nectar sources. They leave their breeding grounds and fly thousands of miles to their wintering grounds in Mexico. Starting in mid-November, they arrive and gather in oyamel fir trees on south-facing mountain slopes. The butterflies will spend the winter there, then in the spring, the same monarch that arrived in Mexico in the fall will begin the journey north. These monarchs will reproduce and lay eggs in Texas and the southern United States, and typically the first generation of these monarchs migrate north. Once at their breeding grounds, they will produce two more generations, and usually, the fourth generation migrates back to Mexico.

Much of the information about monarch migration has been determined by tagging, a seemingly impossible feat on such a delicate creature. Monarch Watch, a citizen science project, began in 1992 to tag monarchs to help learn about their migration. Since 2016, researchers at Bernheim Forest have been tagging monarchs caught in the forest. To date, 500 monarchs have been tagged on our grounds.

Monarchs can be found at Bernheim in a wide range of pollinator habitats from our Edible Garden to the cedar glades in the natural areas. The Edible Garden is a dedicated Monarch Waystation growing both nectar plants for adults and milkweed for the caterpillars and has become a hotspot for monarchs during migration. Within our 15,000+-acre natural areas, pollinator habitats with both nectar sources and milkweed abound throughout the forest. Bernheim has protected these natural resources, providing ongoing support of monarchs and other pollinator species.

In October 2020, researchers at Bernheim were thrilled with the news that we had our first recapture in Texas – more than 800 miles away. The monarch was caught on October 6 at Bernheim and then recaptured in Texas on October 31, meaning the monarch traveled more than 32 miles a day on its fall migration.

Our goal is to continue to tag more monarchs and, with the help of many citizen scientists across the United States and Mexico, learn more about the migration of these incredible butterflies.