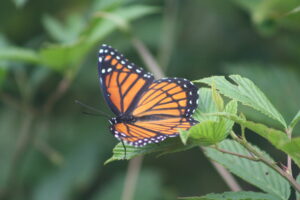 It’s fall again, and usually at this time everyone is seeing the Monarchs on their migration south. However, there is another orange butterfly that can also be seen now and is easily confused with Monarchs, the Viceroy Butterfly (Limenitis archippus).

Viceroy are Kentucky’s state butterfly and look similar to monarch. They are normally found in wet areas, and it was once believed that they mimicked the poisonous monarch to protect them from predators. It is now known that viceroy are as equally toxic as monarch, thus equally benefiting each other from predators with their similar coloration. This double protection is called Mullerian mimic.

Viceroy can be distinguished from monarch by a black line on their postmedian hindwing that monarch lack. Also viceroy are smaller than monarch and their flight is faster and more erratic than monarch. Unlike monarch, viceroy don’t migrate and will spend their winter as a caterpillar curled up in their host leaves (willow, poplar, and cottonwood). Viceroy populations are considered stable, but there is some concern with the continuous loss of habitat for the future of the butterfly.