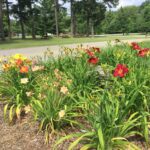 Hemerocallis, most commonly known as the daylily, is sometimes considered the perfect perennial. Hemerocallis means “Beauty for a Day”, a fitting name since the bloom of the Daylily typically lasts a day’s time. This flower, of Asian descent, was only originally found in three different colors: red, orange, and yellow. Today, however, hybridizing has allowed for at least 35,000 named and officially registered cultivars.

Daylilies are able to grow in much of the United States, as they thrive in zones 3 to 9, which spans from Minnesota to Florida. Full sun and well drained soils provide an ideal scenario for plant growth. Few to no pests or diseases impact the daylily and they tolerate a range of different soil types. The time of bloom varies with the type of Daylily and the plant hardiness zone in which it is planted, though most bloom between May and August. Depending on variety, after four years, the bloom production of a plant may decrease, indicating that it is time to divide the plant.  Dividing Daylilies is most successfully done in the fall, after the blooming season, or in early spring.

The Daylily was one of Mr. and Mrs. Bernheim’s favorite flowers. There are over twenty cultivars throughout Bernheim Arboretum and Research Forest, most visible in front of the Visitor Center and in the Edible Garden. Many of these cultivars were attained from the Louisville Daylily Society and Western Kentucky Botanical Garden.