Interview with Jocari Beattie, former Jefferson Memorial Forest staff and JoBé Besk inventor.
In Celebration of Black History Month, Bernheim’s Field Ambassador interviewed folks prominent within their communities and asked them to share their connections with land and heritage. In today’s interview we share and welcome the stories of a curious mind, nature lover, and inventor, Jocari Beattie. Jocari grew up in an urban environment, still he found his way to creeks, forests, canoeing, and more. The summarized transcription below emphasizes one of many pathfinders who are making space, when there is none, for others to connect with nature.

Can you tell us your name, occupation, where you and your family are from, and where you currently live?
Cool. My name is Jocari Beattie and I am CEO of Jobè Products. I was born in Lexington, KY and raised in Louisville. I went to college in Northern Ohio and Florida. Throughout my life, nature has been somewhere I could go by myself and rejuvenate, whether that’s thinking or getting away from whatever stressful situation may be going on. It’s like I recenter whenever the outside influences disappear

My first question for you is what knowledge has your family given to you in relation to identity, land, and heritage? And, if they haven’t that’s completely okay too!
So primarily I would say they haven’t. There are not too many nature buffs like me in my family. I do have a grandfather who was the equivalent of a caretaker of a park. My grandmother was also born at the park- so that’s kinda cool. But outside of that, they might take us to the park for fun when we were smaller. It was nothing like going out into nature and exploring it. I had to explore and figure that out on my own.

Do you know the name of the park that your grandfather worked at?
I do! It’s named Douglas Park. The house that he lived in at the park doesn’t exist anymore. I believe that was one of the first Black parks in Kentucky [First in the Bluegrass Region]. Initially it was a segregated park, and he was the caretaker. He got to live there with my granny and all his children. My granny was born on the park bench which is kinda cool. Oh, he was an inventor too! I worked for parks at one time and I’m an inventor. It’s cool how that came back around. 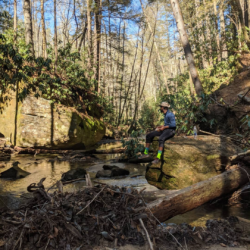 Oh snap, that is nice. You worked at JMF [Jefferson Memorial Forest] and now you have your own backpack-desk invention- okay! I know you referenced nature as being therapeutic. In what other ways do you feel like you connect with land or experience nature?
If we talk about experiences, I know I use the outdoors for exercise. I have a lot of outdoor hobbies. I used to mountain bike a lot when I tore my knee. Instead of doing boring biking on the road for recovery, I decided on the most dangerous biking I could do. After working at JMF I got into canoeing. Before that it was primarily taking in the sights, sounds, and flow of water.

As a kid I would try to find crawdads and salamanders in creeks then bring them home. I would get told to take them back to the creek. My parents usually weren’t okay with my bringing them home, so I would have to hide them. I would hide them in a water bottle or in my small fish tank. They kept dying for some reason but then I learned I probably shouldn’t take them home where they might die.

It seems you had a curious mind about animals and nature when you were young.
100% – throughout my whole life. The only thing I watched on tv was Animal Planet and the Discovery Channel. Watching people explore and teach helped me learn about different animals, landscapes, environments, adaptations, and traits. I just thought all that stuff was pretty interesting. I used to be able to go on my own explorations at a nearby creek– it was pretty exciting. 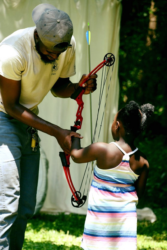 Was there representation in the shows you watched as a kid? If there was or wasn’t, how much did that influence your curiosity to work outdoors?
Um, no I didn’t see any representation of anyone of color. The only Black people I would see were animal catchers, from the Humane Society, who would help remove a dog, alligator, or something that wandered into a dangerous space. But other than that, nah – not really. Everybody was white. But it [representation] didn’t really have that much of an impact on me when I was young. I didn’t really look at shows to be like “man I wish I could do something like that.” Even though I didn’t see people like me, I knew that was an option for me if I wanted to make it happen.

Did your parents have the same curiosity for the outdoors and nature? Did it trickle down through your family or do you think there was a disconnect somewhere?
I think there was a disconnect. I have gone hiking with my mom before and she thought it was pretty cool. It’s not something she does on the regular. Never really went hiking with my dad but I have taken other family members. Every time I did something in nature with them, the response was like “I didn’t even know it could be like this!” It’s a new space that they never really explored. Then they may hit me up and ask if I want to go hiking. It’s cool to get them to try something new and then find out that they love it.

What do you think manifested the disconnect?
One thing is, I come from a pretty urban family. If you think of where we live, you don’t think of being by nature– there’s a lot of concrete and buildings. You may not think the park is nature. It just may be something that they weren’t around. On top of that, we did not have contacts reaching out saying, “oh hey you can come to my farm or go hiking.”

It was not an interest of a lot of people and it’s hard to get introduced to something that you have no exposure to. When it comes to my parents’ interactions with nature, you don’t know what you don’t know. Truthfully, that is probably why they were more disconnected. But I know the outdoors hasn’t always been looked at as the safest place in America for Black people 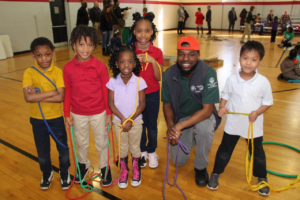 From your personal experiences, have you ever felt that way too?
For sure, when I go backpacking and stuff. I love the outdoors but I’m not going without some type of protection. when you go to certain spaces, some people may not be familiar with seeing Black people. They might be used to stereotypes seen on tv, so they are already on guard. For example, I love off-roading and used to have a Jeep Wrangler. I would go with homies, usually Black people, to give them the experience

Can you talk about the reaction of some of your family or friends when you invite them to share these experiences with you?
It’s a mixture and I can see why that is. I’m like the only Black person they’ve heard say they like to go canoeing. Some family members feel like I’m always doing some white-Black activities. That’s pretty much them knowing I’m Black but feeling like I do white stuff such as hiking and canoeing. I get that [no] pretty often but sometimes I’ll ask people who give it a try. Once they have tried it, they’ll express how fun it is.

Do you have any other outdoor traditions, outside of mountain biking, that you practiced at JMF or practice at Jobè Products?
With my company, we do something monthly or bi-monthly together primarily with nature – hiking, going to different bodies of water, public parks, mountain biking. I like swimming in natural bodies of water. I’m trying to get more people, especially Black people and my friends, more in touch with canoeing. With canoeing we get to go to some pretty cool places.

What was your overall experience working at Jefferson Memorial Forest?
Good. It wasn’t like all of my coworkers were in the same club and I was somehow left out. Everyone’s passions, hobbies and personalities were unique. I got to learn a lot from them.

For a while I didn’t really care about being the only Black person until I had to work with Black communities. Immediately I asked “why do you want me to do this?” I didn’t want to be used as a sheepdog or just a face. I got a better understanding of the purpose and programs we were implementing for people in West Louisville and urban areas. I had no problem helping expose people to the outdoors or helping to diversify the staff. We had to take a deeper look into the barriers associated with the application process like verbiage or connecting people to our job opportunities.

There is no way I would have heard about my JMF job without going through the extensive pathway I took. I never want it to be as complex for others.

You mentioned not wanting others to face an extensive process to find jobs in the nature field. So, did you advocate for more accessible ways that young folks could get a job in the forest?
Certainly! Some of that was exposure through Summerworks and trying to increase their chances of getting hired by JMF after the summer. I worked on an intentional system to meet people where they were at and have discussions about job opportunities. I used my connections to show people in the community that they could do what I do. I remember one of the first community centers that came out and saw me. They were surprised to see me and know that they were going to have Black leader at the Forest. It was dope and super welcoming. There are times we had groups come out and I would notice them open up after seeing me.

Originally when I started working at JMF I was seasonal then they sort of created my position around me. We have to make space where there isn’t any. Thank you for reaching out. I am glad I could participate.