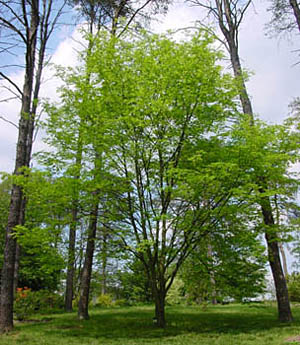 Cladrastis is from the Greek klados and thraustos which mean “branch” and “fragile” in reference to the brittle wood; kentukea means “of Kentucky.”

Yellowwood is named for the bright yellow heartwood. Other names include American yellowwood and virgilia.

Yellowwood is a rare tree native to isolated locations across the southeastern United States from North Carolina to Kentucky and Tennessee. Its occurrence is infrequent and local across Kentucky. Various references show it scattered in Indiana, Illinois, Georgia, Alabama, Mississippi, Arkansas, Missouri, and Oklahoma. Yellowwood typically occurs in rich, well-drained limestone soils in river valleys, slopes and ridges along streams. Yellowwood is the only species of Cladrastis that is native to North America.

Yellowwood is among the rarest of trees in the eastern United States, but it is not ranked as a plant of conservation concern by the Kentucky State Nature Preserves Commission. 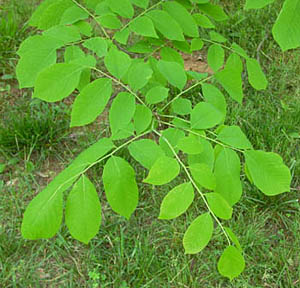 Yellowwood is a medium-sized, deciduous tree with a vase-like form. It typically forks repeatedly and develops a broad rounded crown in full sun, but maintains a single tall stem and much narrower form under dense shade. Trees typically grow 30 feet in height. The average lifespan is less than 100 years.

Leaves are alternate and pinnately compound, usually with 7 to 9 leaflets, each about 4 inches long and half as wide. Summer color is bright green and fall color tends toward a golden-yellow, and contrasts handsomely with the smooth gray bark. 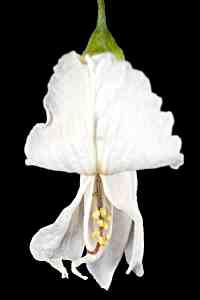 Yellowwood blooms sporadically every 2 or 3 years. Fragrant, white, pea-like flowers hang from branches in late spring in 8 to 14 inch clusters, densely covering the tree and providing a spectacular display.

The fruit is a 2½ to 4 inch long dry pod (legume) that ripens in the fall and persists into winter. The legume contains 4 to 6 brown seeds.

The bark is smooth and pale gray and resembles the bark of beech (Fagus grandifolia). The wood is yellow and was the source of a yellow dye. 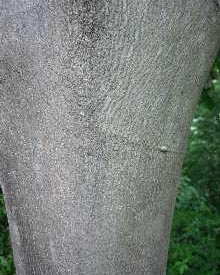 ‘Rosea’ (syn. ‘Perkins Pink’) has fragrant, light pink flowers in panicles that are 10 to 15 inches long. The cultivar was originally grown from seed that was collected from a single tree on the grounds of the Perkins Institute for the Blind in Massachusetts and distributed by the Arnold Arboretum at Harvard University. Its status as a cultivated variety versus a natural variety remains a discussion topic among botanists.

Yellowwood is a gorgeous, medium-sized, native tree with an elegant branching pattern. The spring flowers, fall foliage, and smooth bark make this an attractive tree. Trees are best used for shade and as specimens. Hardiness Zone

Yellowwood grows relatively slowly, 9 to 12 feet over an 8 to 10 year period.

Yellowwood can be transplanted easily in the spring as a balled-and burlapped or container-grown plant. Trees grow best in fertile well-drained soils and. Best growth is in full sun to partial shade. Yellowwood was introduced into cultivation shortly after its discovery by botanist Andre Michaux in 1796.

Very few problems are associated with this tree. Yellowwood is susceptible to Verticillium wilt, mildew, root decay and cankers.

The flowers are a source of nectar for honey bees.

The narrow branching pattern makes the tree prone to splitting. Corrective pruning done late in the growing season (summer) is important when the tree is young in order to eliminate weak branch forks. The thin bark is easily damaged.

Native Americans used the wood for building and carvings.

The root bark of yellowwood was a primary dye ingredient for early settlers in the southern Appalachians.

The bright yellow wood is used by woodworkers for small specialty items.