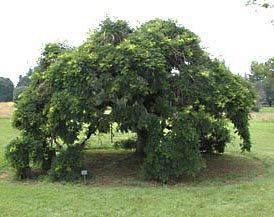 Japanese pagodatree is named for the use of the tree around temples in China. Pagodatree is also called scholar-tree because it was planted at the graves of Chinese scholars. It was an official memorial tree during the Chinese Zhou dynasty (1030-220 BC) and used around Buddhist temples.

Pagodatree is native to China and Korea. Trees grow in well-drained soils and full sun.

Not native to Kentucky.

Weeping pagodatree is a deciduous tree that typically grows 15 to 25 feet in height. It has a weeping form with pendent branches. The species form (Styphonolobium japonica) requires tremendous space and is best reserved for large areas. It grows 50 to 70 feet high and wide. 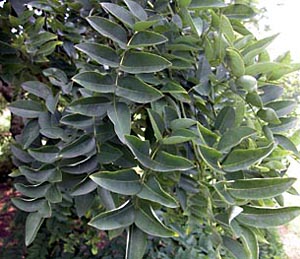 Leaves are compound, 6 to 10 inches long and have 7 to 17 leaflets. Leaves are shiny green and turn soft yellow in autumn.

Fruit is a 3 to 8 inch-long green pod that turns golden when ripe. The pod is constricted between each seed, resembling a string of beads. The constricted seedpod is a key identification feature of this tree. Fruit ripens in October and pods persist through winter.

The bark is green to brownish-gray, furrowed and has tan lenticels.

‘Regent’ has an oval-rounded form.

Pagodatree is pollution tolerant. Weeping pagodatree’s pendulous habit makes it a beautiful choice for an accent or formal specimen.

Historically Japanese pagodatree was planted around Buddhist temples in Asia. The flowers have been listed as a famine food in China and Korea.

Japanese pagodatree is a popular container and in-ground ornamental. Japanese pagodatree was introduced into cultivation in the U. S. in 1747. Yellow dye can be extracted from the flowers by baking them and then boiling them in water.