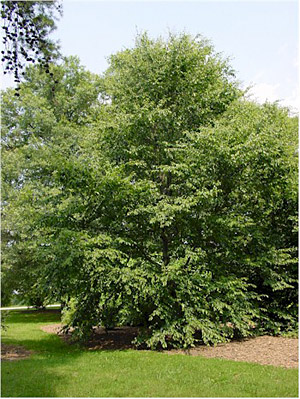 Sweet birch is named for the sweet sap used by Native Americans for syrup production. Birch is from the Old High German word birka and is related to the word “bright;” probably due to the pale bark of some birch species. Other names include black birch and cherry birch.

Sweet birch’s native range is Maine to Alabama and west to Ohio. Trees grow in rich, mesic sites, including coves and lower slopes. In Kentucky, sweet birch occurs infrequently in mixed mesophytic forests in the Appalachian Plateaus province. There are some 40 species of birches found in the temperate regions of the world with the United States and Asia home to the largest numbers. Birches are among the first species to colonize abandoned fields, roadside cuts and disturbed sites. Betula lenta and Betula alleghaniensis are common colonizers along highway cuts in the southern Appalachians.

Sweet birch is not ranked as a plant of conservation concern by the Kentucky State Nature Preserves Commission. 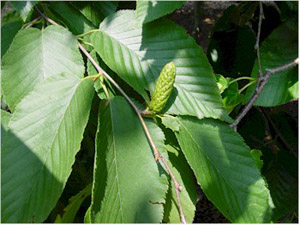 Sweet birch can grow to 40 feet in height in the landscape. Young trees are pyramidal and dense forming an irregular, rounded, sometimes wide-spreading crown at maturity. Sweet birch lives to a maximum of 200 years.

The leaves are glossy dark green above and paler beneath. Leaves are alternate, simple, serrated, ovate in shape, and acuminate. They are 2 ½ to 6 in. long and 1 ½ to 3 in. wide. The deciduous leaves turn bright yellow in autumn before dropping. This species has perhaps the best fall color of any birch, turning a vibrant gold that is outstanding in combination with its rich, dark reddish bark.

The flowers are monoecious, male (staminate) and female (pistillate) flowers on the same tree. Male flowers are apparent on the tree during the winter as they are formed during summer and fall of the year prior to flowering. Male catkins are yellowish-green, pendulous and 3 to 4 inches long. Female flowers are light green, upright and ½ to 1 inch long. The birches flower in April before the leaves emerge; pollination is by wind.

The fruit is a small winged nutlet occurring in an upright strobile. Seeds are scattered throughout winter by wind. Seed germination occurs the following spring.

The bark on young trees is reddish-brown to almost black with prominent horizontal lenticels; on mature trees brownish black and breaking up into large, thin, irregular, scaly plates. Sweet birch has a strong wintergreen aroma.

Sweet birch is an excellent tree for parks or campuses and naturalized areas. Notably the best of birches for fall color.

Growth is best in deep, rich, moist, slightly acidic, well-drained soils in full sun to partial shade. Trees perform reasonable well on the heavy soils of the Midwest. Sweet birch often forms thickets on disturbed or abandoned sites. It was introduced into cultivation in 1759. Birch seeds have low viability, but produce numerous nutlets. Germination is facilitated by exposure to light, so do not sow seeds too deeply. One month cold stratification will compensate for light treatment.

Most birch species are susceptible to many disease and insect problems. Leaf spots, blisters and rust, canker, dieback, wood-decay and mildew are the most commonly noted pathogens. Sweet birch is intermediate in resistance to bronze birch borer, depending on its vigor.

Sweet birch was once a source of commercial supply for oil of wintergreen. The oil was distilled from the stem and bark.

Birch sap can be boiled into syrup as for sugar maple.

Birch beer was made by boiling sap down or adding honey, then fermenting.

Fermentation of sap was also used to produce vinegar.

The wood is occasionally used for face veneer, furniture and cabinetry.

The twigs make the best ‘wilderness’ toothbrushes. The reddish-brown slender twigs have a strong wintergreen odor when bruised or broken.