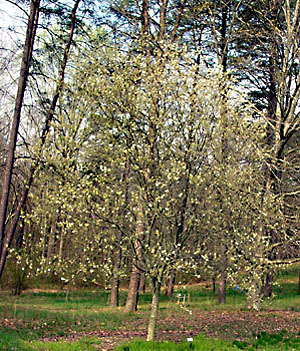 Amelanchier is an old French name for snowy-mespilus (Amelanchier ovalis); arborea is Latin for “tree-like.”

Downy serviceberry is native to eastern North America. In the wild trees are found along borders of woodlands and stream banks, although it also occurs on hillsides and mountain slopes. In Kentucky, downy service berry occurs frequently in dry to wet woodlands of slopes, plateaus, and bottoms in the Appalachian Plateaus, Inner Low Plateaus, and Mississippi Embayment provinces. 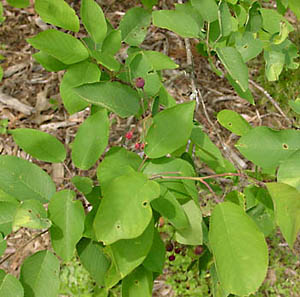 Downy serviceberry is not ranked as a plant of conservation concern by the Kentucky State Nature Preserves Commission.

Downy serviceberry leaves resemble those of their close relative, the apple. Leaves are simple, alternate, oblong and 1 to 3 inches long. They are downy beneath and smoother above. The leaves are silvery-gray and fuzzy when first emerging. Summer foliage is dark green. Fall color can vary from yellow to orange to red. Some authorities hold that downy serviceberry is one of the finest small trees for fall coloration. 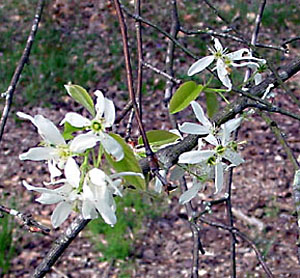 Downy serviceberry blooms in clouds of white in early spring woods. The 5-petalled, dainty, white flowers bloom in March and April. Flowers hang in elegant clusters from the branches and are 2 to 4 inches in length. The flowers are very ornamental but are at their peak for only a few days, fading just as redbud (Cercis canadensis) steps forward to change the predominant color of the woods from white to rosy pink.

Small, berry-like pomes (fleshy fruits with seed chambers) ripen in June. The fruits turn from green to red to purplish-black and are eaten by wildlife. The seeds are scattered by songbirds and other wildlife.

Young trees are covered with smooth gray bark with lighter vertical fissures, often with a reddish cast. The bark of older trees becomes ridged and furrowed and scaly. The smooth gray bark and artistic branching patterns enhance the winter landscape.

Over twenty cultivars are listed by authorities. The cultivar, Autumn Sunset, is recommended for Kentucky. ‘Silver Fountain’ is a large, rounded, weeping form with pendulous branches that reach the ground.

Downy serviceberry is best used in a naturalistic planting and to attract wildlife. It can be planted singly as a specimen or in groupings. It is one of the finest small trees for fall coloration.

Serviceberries are extremely adaptable to a variety of sites and soils. Growth is best in full sun to light shade and moist, well-drained, acid soils. Transplant balled and burlapped or container grown plants into moist, well-drained, acid soil. Plants can be propagated by sowing seed that have undergone cold stratification, stored 90 to 120 days at 41 degrees F in moist medium.

Serviceberry is a food source for the larvae of tiger butterflies and viceroys. Gypsy moth larvae also feed on downy serviceberry. The fruits provide food for wildlife, including birds, squirrels, black bears, and elk. Serviceberry fruit is probably the best summer fruit for birds. The flowers are pollinated by bees, beetles and butterflies.

Downy serviceberry rarely requires pruning. It is not particularly pollution tolerant and is not reliable under high stress conditions.

Native Americans ate the fruits fresh or dried them for pemmican and cakes.

An extract of the bark was used as an anti-diarrheal medication.

The hard, fine-grained wood is used for tool handles.

The fruits are occasionally used to make serviceberry pies, jams and preserves. Fruits must be picked before birds clean the plants.

Downy serviceberry was introduced into cultivation around 1746