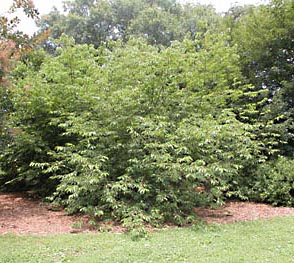 Halesia was named for the Reverend Stephen Hale (1677-1761), a physiologist and author of Vegetable Staticks (1727); carolina indicates that it is named after the states of North and South Carolina.

The common name is derived from the flowers that resemble small silver bells. Other names include mountain silverbell, Carolina silverbell, opossum wood, and snowdrop tree.

Common silverbell grows mostly in the Piedmont and mountains of the Carolinas, eastern Tennessee, Georgia and Alabama. Its distribution extends beyond this central area in small populations scattered over the southeastern Coastal Plain, western Virginia, West Virginia, southern Ohio, southern Illinois, southern Indiana, western Kentucky, Tennessee, central Arkansas, and southeastern Oklahoma. Common silverbell grows in moist soils along streams in the understory of hardwood forests. It reaches its greatest size in the southern Appalachian Mountains where it is called mountain silverbell. 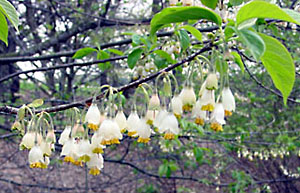 Native to Kentucky. Common silverbell is ranked as a plant of conservation concern (threatened) by the Kentucky State Nature Preserves Commission. 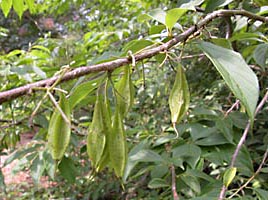 Leaves are alternate, simple, 3 to 6 inches long and 1/3 to ½ as wide, ovate to ovate-oblong in shape, with a serrate to toothed margin, dark green above, pale and covered with short hairs below. Common silverbell is one of the earliest trees to lose its leaves in the fall. Fall coloration is a mottled yellow-green.

Common silverbell bears very showy, white, pendulous, bell-shaped flowers borne on long stalks in cluster of 4 to 5. Each flower consists of four fused petals, with the flowers persistent for about a week. Flowers are 3/4 to 1 inch long. Flowers bloom in April and May and are pollinated by insects.

The lime green fruits have 4 thin wings and are 1 ½ to 2 inches long. Fruits ripen to brown in September and October. The fruits contain a hard stone with 2 to 3 seeds.

When young, the bark is red-brown with white stripes, forming a rough diamond-shape pattern. Older trees develop ridges and furrows. Mature bark is dark gray and sometimes mottled with a lighter brown coloration.

‘Arnold Pink’ is a form that features ¾” long, rose-pink flowers that fade to very light pink. The Arnold Arboretum introduced it.

‘Meehanii’ is a shrub-like form that grows to only 12 feet tall. The numerous white flowers are smaller than the species form and the leaves are coarser and more wrinkled.

‘Silver Splash’ and ‘Variegata’ are two selections that have green leaves streaked and splashed with white or yellow.

‘Wedding Bells’ (‘UConn Wedding Bells’) is a smaller form with a rounded habit reaching 20 feet tall. This plant has more numerous white flowers that are larger than the species and open more fully. The leaves are also somewhat shiny.

Common silverbell is an attractive, small tree or large shrub for the shrub border or woodland garden. It is an interesting specimen or understory plant.

Growth is best in moist, fertile, well-drained, slightly acidic soils with lots of organic matter. Plants prefer full sun or partial shade on cool, sheltered sites. Common silverbell transplants well as balled and burlapped or container-grown stock. It can be propagated by seed, root and greenwood cuttings and air layering.

Common silverbell appears to be free of serious insect pests or diseases.

Squirrels use common silverbell seeds for food ant the trees for dens. The heavy flower crops in spring are very attractive to bees.

Common silverbell is a beautiful ornamental tree and not well-known in gardens. It was introduced into cultivation in 1756.