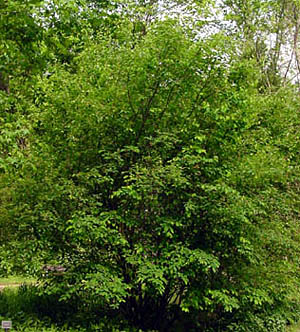 Amelanchier is an old French name for snowy-mespilus (Amelanchier ovalis); lamarckii is Latin for the French scientist Lamarck who worked during the late 1700s and early 1800s.

Serviceberry refers to the Appalachian tradition of holding memorial services for the dead that coincided with the blooming of the serviceberries. Serviceberry may be a derivation of the word ‘sarvisberry’ for the resemblance of the fruits to the sarvis tree or European mountain ash fruits. 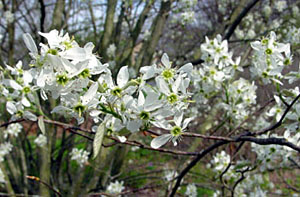 The Kentucky State Nature Preserves Commission does not rank apple serviceberry as a plant of conservation concern.

Apple serviceberry is a naturally occurring hybrid between Amelanchier arborea and Amelanchier laevis that grows 15 to 25 feet tall. It exhibits characteristics intermediate between those of the parent 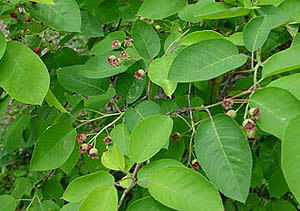 species. Multiple stems are upright and highly branched forming a dense shrub, or if properly pruned, a small tree with a vase shaped form and an irregular outline or silhouette.

Leaves are simple, alternate, and 2 to 4 inches long. Newly emerging leaves are purplish and slightly pubescent (covered with short soft hairs), a character that distinguishes the hybrid from its parents. The fall color is yellow to orange.

Apple serviceberry offers white flowers that are larger than those of other serviceberries. White flowers occur in fleecy clusters (panicles). The flowers are borne in early spring and are at first tinged with pink but later fade to white.

The fruit is edible, sweet, 3/8 inch across and red to purple at maturity.

Young bark is reddish brown. The bark of older trees is dull grayish brown. Bark is thin and easily damaged from mechanical impact.

Most of the cultivated varieties of serviceberry are selections of Amelanchier x grandiflora.

‘Autumn Brilliance’ has persistent leaves that prolong the fall season, and rapid growth.

‘Cumulus’ is a tree form with exceptionally abundant flowers.

Apple serviceberry is superior to either parent species in that it suckers less and is adaptable to a wide variety of soils in pH range from 4.0-8.0. Apple serviceberry grows in sun or partial shade. It tolerates drought but not wind. Apple serviceberry is best used in a naturalistic planting and to attract wildlife. It can be planted singly as a specimen or in groupings. The main ornamental feature is the white flowers borne in drooping clusters in mid spring.

Many birds and animals are extremely fond of the fruits.

Apple serviceberry can be trained to grow with a single trunk. Plants need little pruning to develop a strong structure.

Apple serviceberry has been in cultivation since 1870.