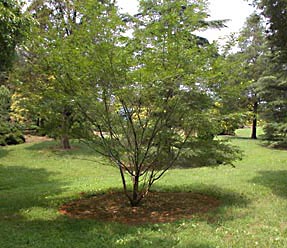 Prunus is the Latin name for plum; subhirtella is Latin for “somewhat hairy” and refers to the fuzzy undersides of the leaves.

Higan cherry may be named for the Higan, a weeklong period of Buddhist memorial services held in Japan twice a year and centered on the vernal equinox in March and the autumnal equinox in September. Other names include spring cherry and rosebud cherry. The name rosebud cherry is from the dark pink buds that resemble rose buds.

Higan cherry is native to Japan. It is seldom cultivated in the species form. A number of botanical varieties and cultivars of the species are popular garden ornamentals. This highly variable tree has a long history of cultivation in Japan.

Not native to Kentucky 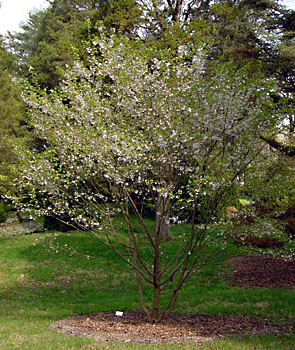 Double-flowered (’Autumnalis’) Higan cherry is a 25 to 35-foot-tall and wide tree with a multiple trunk, slender, upright branches, and a rounded canopy. Before the leaves appear in spring, the trees are covered with many semi-double pink flowers; some flowers may also appear in autumn if the weather is sufficiently warm. Trees are long-lived and mostly problem-free once established.

The 2 to 4 inch-long leaves are alternate, simple, toothed on the edges, and ovate. The foliage is an attractive green. The leaves cast light shade below the spreading canopy, and turn attractive fall colors of yellow and bronze before dropping. The undersides are fuzzy, with 10 pairs of veins.

The deep pink buds open to light pink blossoms that turn almost white before fading. Flowers bloom in clusters of 2 to 5 before the leaves in March and April. The flowers are single or semi-double and ½ to ¾ inch in diameter. The flowers may bloom on warm days in autumn or winter. Pollination is by insects. 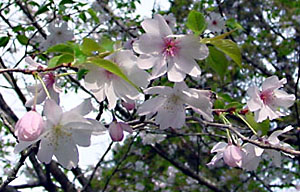 The fruits are oval drupes, fleshy fruits that are 1/3 inch in diameter. Fruits ripen from red to shiny black in autumn. The fruits are eaten and the seeds are scattered by wildlife.

The forked trunk is covered with shiny, reddish or grayish-brown bark. Some trunks may display curly peeling bark. The bark is speckled with prominent lenticels.

Relatively disease- and insect-free. ‘Autumnalis’ is resistant to many of the insect and disease problems that plague other cherries.

The fruits are eaten by wildlife.

Double-flowered Higan cherry requires good care to become established, once established it is very tough and carefree. Intolerant of smog. Heavy winds, snow, or ice can cause damage as wood splits easily.

In Japan, cherries are called zakura and have been honored for 5000 years.

A spring festival called hanami or “flower viewing” occurs when the cherries bloom.

Many cherries are economically important for fruit production.

Higan cherry was introduced into cultivation in 189