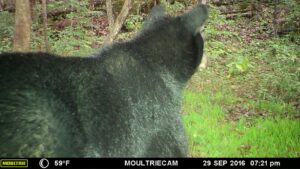 Have you heard? Two trail cameras caught images of a black bear on September 29, 2016. We are thrilled to be home to this magnificent animal – it’s a sign that Bernheim’s stewardship efforts throughout our 87 year history have established a healthy forest that creates a viable habitat for bears. Bears largely disappeared from this region for nearly a century, so their return is a great indicator of the pristine condition of Bernheim’s forest.

We also know that this is just as exciting for our community. We hear from many neighbors that they’re hoping to be lucky enough to catch a glimpse of him (at a safe distance). As the newest member of Bernheim’s family, we want him to have a name, and you get to help us choose it. The choices are Bernie (short for Bernheim), Ranger (because he has a large range, roaming throughout the corridor from the eastern Appalachian mountains to Kentucky), and Wilson (named for the Wilson Creek Valley, one of the locations he was spotted at Bernheim).

Voting ends TONIGHT, October 12, at 11:59 p.m. We will announce the winning name as a part of our annual ColorFest celebration. ColorFest is this weekend – October 15-16. Click here to place your vote and stay tuned!