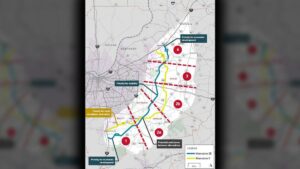 The best route for a new bypass around Louisville would run from an Interstate 65 interchange under construction in Bullitt County to I-71 near La Grange.

It would cut a 44-mile path outside the Gene Snyder Freeway, passing through portions of Jefferson, Spencer and Shelby counties – all at a tentative cost of $950 million.

A different approach would use 45 miles of existing right-of-way and add to or improve current roads, including Ky. 44 between Shepherdsville and Mt. Washington, and veer farther east. Its cost is roughly set at $650 million.

Those two concepts emerged as the top recommendations from a long-awaited study of a possible “regional connector” in counties south and east of Louisville. The state legislature commissioned the $1.8 million review in 2018 after it was first endorsed by Bullitt County officials.

The report, released by the Kentucky Transportation Cabinet in September, doesn’t endorse either idea, but instead views the findings as a “first component of a multi-phase planning effort for a future connector.”

Kentucky will not add to its short- and long-term highway plans until 2022; for now, there is no funding set aside for any part of the bypass recommendations.

It’s too early to know if a project from the study will be included, said Stephanie Caros, a Transportation Cabinet spokeswoman. But the study notes that if state officials move forward with the corridor in any form, it also could combine elements of each idea to form a network of new and existing roads.

“I think another thing that’s important to point out is both of these alternatives can be done — if they are ever done — they can be done in segments,” Caros said.

“So you could have one piece of one of these done to help alleviate congestion in one area without the rest of the actual corridor being built. And I think that that’s something that folks should understand.”

The study caps a process that renewed a debate over land use and road planning in an area that includes swaths of farmland, green space and conservation lands, such as Bernheim Arboretum and Research Forest in Bullitt County. It’s also an area ripe for population and business growth.

The corridor’s “purpose and need” is based on what state officials consider “substantial and increasing congestion” on major interstates, such as I-65, I-64 and I-71, and “inefficient travel” outside of the Snyder Freeway, along with current and envisioned development in outlying counties.

Traffic and other estimates are based on pre-pandemic travel patterns, although the study takes into account interstate widening projects such as I-Move Kentucky to expand I-71 and the Snyder Freeway.

The routes were scored based on six categories: Mobility; land use and development; safety; environmental; cost and construction; and the preferences of the focus groups.

There was no consensus on which routes were best. Jefferson County’s focus group preferred to build nothing at all, while federal officials liked upgrading existing roads because of the lower cost and renovations to Ky. 44.

Officials in Bullitt and Nelson counties were split between the two recommended routes, while Oldham and Henry County representatives wanted corridors that would tie into an interchange near La Grange that could connect to a new industrial area.

The Bullitt County Economic Development Authority, a leading advocate of the study, declined to comment for this story.

Kentucky’s road fund fell $60 million short of estimates for the year ending in June, according to state figures. That’s a concern to state Rep. James Tipton, a Republican who served on one of the focus groups and represents Spencer and part of Bullitt County.

“The state doesn’t have the revenue for a project like that,” he said, adding that other projects are being “gutted” as road fund receipts have fallen during the coronavirus pandemic.

“It’s a good study for us to have, to look at, to plan from,” Tipton said. “But I don’t think it’s something that we’re going to engage in in the near future.”

The project team decided not to hold any community meetings or gather widespread public input because of the “sheer size of the corridor and the lack of any funding beyond this initial planning study,” the report says.

Berry said Bernheim supports the other alternative, in part because it addresses Ky. 44, the main connection between the county’s largest cities, Shepherdsville and Mount Washington.