Bats are an important part of Bernheim’s biodiversity. They play a critical role within our ecosystem by controlling insects.

Many areas of eastern North America are seeing bat population numbers plummet due to habitat loss, diseases such as white nose syndrome, and decreasing food sources. Bats that are dependent upon caves for hibernation, such as the myotis species Indiana, Little Brown, and Northern long-eared bat, have shown to be most at risk from white nose syndrome. The disease spreads easily during hibernation where bats congregate in cool damp cave environments. The Myotis species are also some of the smallest bats, and when they lose weight over winter and emerge early from hibernation, they find no insect food sources available and perish in high numbers.

Other bats have fared better, such as Eastern Red Bat and Big Brown Bat, that have shown to be less susceptible to white nose syndrome. Eastern Red Bats are larger tree dwelling bats, do not roost in caves during winter, and have as many as three pups per year. Big Brown Bats do use caves, but are more solitary and diverse in their winter sites, have larger bodies, and are better adapted to winter foraging. Both species currently remain stable at Bernheim, and are likely some of the most commonly sighted in evening hours. 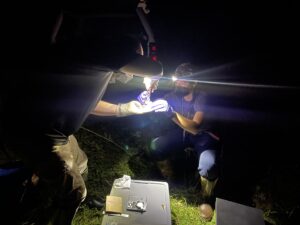 The 2021 Kentucky Bat Blitz occurred in late August with over 40 bat researchers from the eastern United States converging on Bernheim for two nights of bat netting. Groups set up in favorable habitats including upland ponds, streams, and wetlands. In total, 143 bats of nine different species were caught and banded. Several federally endangered species, including Indiana bat, Northern Long-eared bat, and Gray Bat, were also represented.

The Kentucky Bat Working Group, which is comprised of researchers, educators, environmental consultants, government agencies, and citizen scientists organized this effort.  The group’s goals are to provide information about Kentucky’s bats to enhance conservation efforts and improve communication among land managers, researchers, and work towards protections of bats.

A highlight of the Blitz were Indiana Bats, whose maternity colony on Wilson Creek provided most of the action. A total of 23 Indiana Bats were captured, several of which were recaptures from previous years at the same site. These bats have high site fidelity, and it is likely that individual bats found here will return each year and will add to the maternity colonies when they have babies. 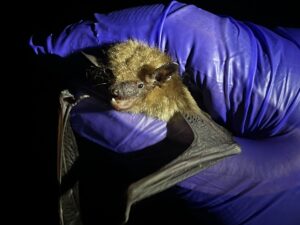 Bats take refuge in large mature forest blocks like Bernheim that provide suitable snags (dead trees) and foraging opportunities with moths and other insects being in abundance. Providing suitable habitat in large forests allows Indiana Bats to successfully rear their young, a critical process for ensuring survival of this endangered species.

Another federally endangered species, the Northern Long-eared bat, has sharply declined over the past decade. Decimated by white nose syndrome, Northern Long-eared Bats also are cave dependent for hibernation and migrate to form maternity colonies at Bernheim during summer. Once abundant, the KY Bat Blitz recorded only one Northern Long-eared Bat this year. This species is on the brink of extinction and depends heavily upon suitable summer habitat to maintain their population. 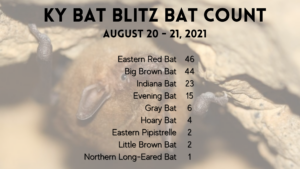 A special thanks to the Kentucky Bat Working Group, Kentucky Department of Fish and Wildlife, US Fish and Wildlife Service, Imperiled Bat Conservation Fund, and numerous environmental consultants for organizing this event and supporting bat research and protection. It will take a dedicated research effort, organizational support, and protection of large forests like Bernheim if we hope to protect the vulnerable bats now declining throughout the eastern United States.

Want to know more about these incredible creatures? Join us as we celebrate Bat Week 2021, focusing attention on bat themed education and awareness with webinars and outreach events. Join us for the Bat Week! Bats of Bernheim Virtual Program on October 25 at 10 a.m. It is suited for kids and adults, providing info on our bat species, key habitats, little known facts, and Q & A session that is sure to give your bat knowledge a boost.