You are here: Home / Volunteer / In memory of John Sutch, Volunteer Naturalist 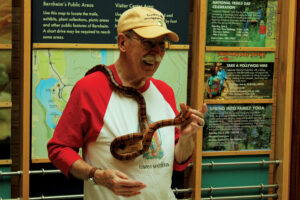 Bernheim Volunteer Naturalists wear many hats in their efforts to motivate people to go outside and enjoy the natural world. Their many roles include storyteller, direction-giver, program and field trip leader, fire tower and discovery station guide, beekeeper, and researcher. They also serve the dual function of myth-buster and fear-fighter. As a Bernheim “snake man” for more than 18 years, John took that role very seriously!

Many people are so frightened of snakes that they won’t take a walk in the woods for fear of running into one. Such fear, while both learned and contagious, is costly to both humans and snakes. Bernheim has been fortunate to have volunteers like John Sutch, who commit considerable time and energy towards helping both curious and frightened visitors have close and positive encounters with a snake.

John began volunteering at Bernheim shortly after I arrived in 2000. He immediately took to working with the snakes and found his niche helping groups of school kids and other visitors replace fears with facts. John understood that knowledge is power, and he wanted to empower people to feel more confident and comfortable so that they could enjoy the wild places that so enriched his own adventurous life. He also wanted to save snakes from the sad misfortune of encountering the fearful and uninformed.

John understood that people are far more dangerous to snakes than most snakes are to people. As one of nature’s most misunderstood creatures, I’m certain that countless snakes were spared the garden hoe due to John’s role at Bernheim as a myth buster. As one of our Volunteer Naturalists, John could be seen at most ECO Kids Discovery Days on the first and third Saturday of each month, often wearing a live snake as a headpiece or necklace. As he interacted with children and visitors, John worked to displace fears with factual information and humorous stories.

Not only did John help thousands of people feel more comfortable around snakes, but he also took great pride in providing excellent care of the snakes in his charge, working hundreds of hours behind the scenes to tend to them.

Sadly, John Sutch, 87, passed away on January 11, 2020, due to complications from Alpha-1 Antitrypsin Deficiency, which attacked his lungs. Not wanting to abandon his post, John continued to volunteer for several months with a portable respirator. He maintained his sense of humor to the end. When I last spoke to John, he was about to move into the Comfort Care Unit of Hardin Memorial Hospital. He quipped that this would be his last stop before “they plant me in the ground” and then with a soft laugh added, “they got to roast me first,” – a prime example of his occasional gruffness, despite his soft heart.

I asked John what we, at Bernheim, could do for him. John requested that we continue to make sure our visitors have opportunities to learn about snakes. With our Discovery Stations, programs, and events, our Volunteer Naturalists will honor John’s request and continue educating visitors about our slithery reptile friends. Rest in peace John Sutch, our myth-busting, fear-fighting friend.