You are here: Home / Blog / Hollies for the Holidays

Of the many plants associated with the holiday season, the Holly (Ilex sp.) has perhaps the oldest history of any other decorative evergreen.  The use of holly in holiday tradition dates back to the Greeks and Romans, who adorned their homes with wreaths and garland made from holly boughs.  This tradition was thought to predict the outcome of the following year depending upon what type of holly was used and where, or when, it was placed in the home.  It is reported that hundreds of thousands of holly sprigs were displayed in London every year during the 16th through 18th centuries.

One of our favorites for decoration is the American Holly (Ilex opaca).  Bernheim’s Holly Collection 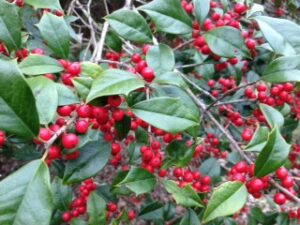 contains more than 160 cultivars, each bearing distinct characteristics in form and shape, with fruit colors ranging from red to burgundy and yellow to orange.  These otherwise quiet specimens seem to come alive during November as branches become heavy with the display of bright berries.  Cedar waxwings and robins can be seen throughout the winter months foraging for some of their favorite fruits among the grove.  Other notable species of holly in this collection, such as Ilex decidua and Ilex verticillata, bear their fruits on leafless stalks during the winter months.

On your next visit to Bernheim, be sure to take a stroll around the Two Ponds Loop that winds its way through the holly collection.  There, you’ll see the colors of winter which appear once a year in a natural holiday display.