You are here: Home / Arboretum / Have you ever spotted a Witches' Broom? 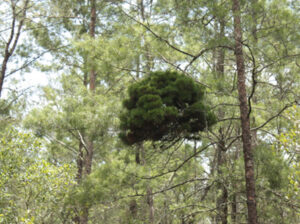 Witches’  Broom is a term commonly used for any tight cluster of abnormal branching or twiggy growth within a tree or shrub.  Caused by factors including fungus, bacteria, or insect damage, they may appear in evergreen and deciduous trees alike.  These odd growths have become popular among plant enthusiasts, who propagate them through a process called grafting to create new and unusual plants.  Each broom is unique in its morphology and varies greatly among different species.  Bernheim’s Arboretum contains over 20 distinct forms of these oddities.  We have found them on Ginkgo, Pine, Spruce, and our native Red Cedar.  Several of these brooms are currently being developed into new “cultivars”, or forms of their parent tree.  Be sure to look up next time you visit!