You are here: Home / Actions Beyond Our Borders / Harper Update: Flight Patterns 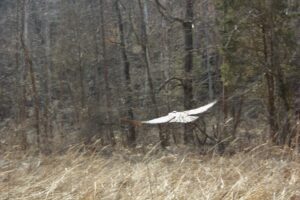 It has been 5 days since our last transmission of Harper’s location. He is likely to be in Canada now, having passed Duluth, MN and then over the Boundary Waters and Voyageurs National Park. It may be a while before he gets back into cellular range to transmit the data. We hope that if he returns to Churchill, Manitoba he will find a cellular signal there. Until then we will continue to look at the data we have already received and see what we can learn.

While we generally know little about the habits of eastern golden eagle, virtually nothing was known of the migration patterns and logistics of flight before the development of cellular and satellite transmitters like the ones used to track Harper. These devices not only allow us to see where the animals have been, but because of technological advances, we can now map and decipher detailed flight patterns.

Our partners on this project, Dr. Tricia Miller and Michael Lanzone of Cellular Tracking Technologies (CTT) and Conservation Science Global, have been leaders in developing and deploying these new transmitters to further our understanding of migratory birds. Dr. Miller states that, “telemetry has allowed us to better understand what golden eagles are doing during the winter. The high temporal resolution (a GPS location every 6 sec – 15 min) data that the CTT units collects allows us to see exactly where and how high they are flying, where they are perching and roosting, and where and when they are hunting. It has truly opened our eyes to what these birds need on the wintering grounds and elsewhere.” 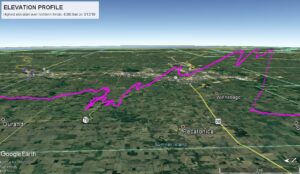 So far, we have seen Harper’s highest altitude at 6388 feet through northern Illinois, approximately 5500 feet above the ground. His top speed during his flight was measured at 65 miles per hour while flying over Bernheim Forest before he began his migration. During his journey north, he has reached a top speed of 60 miles per hour, although his typical speed during migration is 20-30 miles per hour. 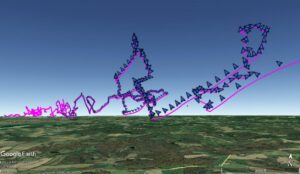 The exceptional detail that his transmitter provides allows us to view in 3-D how Harper flies through the sky. Interestingly he takes time to gain elevation, flying in a circular motion while increasing his altitude. Once he reaches his apex, he spends 3 miles soaring downward. He then flies back up and begins the descent all over again. This pattern allows him to conserve energy as he soars downward, while he likely uses wind currents to help propel him back up and higher into the air to begin his next descent. These flight patterns suggest that this is one of the tricks that golden eagles, and likely other birds, use to fly over long distances.

Stay tuned as we continue to track Harper as he heads towards his breeding grounds in northern Canada.