You are here: Home / Bird Research / Harper has left Bernheim. See where he’s stopping on his migration north.

Stopovers are an important component of bird migration. These stops to rest or feed after a long flight give birds an opportunity to recharge or find cover during difficult weather. Migratory birds using the Mississippi Flyway (“What’s that?” you ask. Click here for more information) cross over vast areas of agriculture and an increasing amount of fragmentation due to development. Our tracking of Harper has followed forested areas, following river banks and protected natural areas on their migration.

Harper’s journey emphasizes the importance of protected forests like Bernheim. During both his flights all stopovers were found to be in forests or woodlots, most being forested blocks away from humans. Flight patterns from our 2018 tracking let us look at detailed patterns of how closely Harper follows forested ridges, riparian (river banks) corridors, and edges of interior prairie and forest.

One of the goals in this research was to see if Harper would use the same stopovers for 2018 as in the 2015 migration. To test this we mapped both routes and identified each nightly stopover, as well as any notable flyway or flyby locations. Our findings were a bit surprising in that Harper did not follow exactly the same route for the first part of the journey and utilized a different set of stopovers. Being that Harper’s migratory routes and stopovers have not been exactly the same, our findings suggest having a multitude across the landscape is necessary to provide enough stopovers.

In 2015 Harper used locations such as:

In 2018 he has used a different set of stopovers: 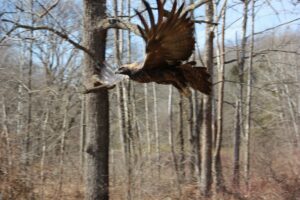 Within the Mississippi Flyway there has been a steady degradation of habitat quality available for migratory species. Fragmentation has made the distance between and total number of possible stopovers fewer. It is not just golden eagles that rely on these refuges, but also a multitude of migratory songbirds, bats, and monarchs.

While there is still some migration left to go in 2018, a clear picture emerges when looking at the stopovers used in both spring 2015 and 2018. There seems to be a dependence on protected large forests and riparian habitats. As we think about the landscape of the Mississippi Flyway and its ever shrinking habitat, it becomes clear that natural areas are critical for conservation of our migratory species.