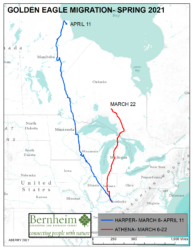 Bernheim is happy to announce that Harper, the male golden eagle and Athena’s mate, has made it Churchill, Manitoba after a long 1700-mile migration. Despite exceptionally high winds and icy conditions along the journey, he completed the migration on April 6, 2021. He made several long stopovers and had been considerably behind his mate in pacing towards the nest. Upon arrival, he checked a favored hunting ground, a vast section of marshes near the Churchill River. Then, with intent and firm grasp of direction, he flew straight to one of their nest sites 30 miles away.

The female golden eagle, Athena, has not checked in since March 22, but the lack of communication is common as she migrates across Canada. This vast section of northern Ontario in which she travels is largely void of cellular towers, and we know from years past Athena does not travel to Churchill along the same route as Harper. She stays deep in the wilderness with the nests during early April. We can assume Athena was waiting at the nest on April 6, and as in years past, quickly greeted Harper so they could begin the cooperative tasks of assessing their nests, scanning their territory, and beginning repairs. Harper’s tracks show dedication to nest repair over following three days, with most of his time spent at the southern nest, though there were several visits to the northern site three miles away. Harper and Athena have maintained two main nests, known as aieries, over the previous years. During nest-building, they gather nearby sticks and conifer branches and strategically place them onto the nests.

Let us not forget that northern Canada is still gripped in snow and ice, and the nests are frozen.  After three days of being near the nests, Harper headed back to the marshes near Churchill, where he checked in April 11. He appeared to be hunting or scavenging late winter wildlife on this frozen landscape. While Athena continues nest-building and protection, Harper must begin to supply food back to the nest to support his mate if nesting season is to be successful.