You are here: Home / Actions Beyond Our Borders / Harper and Athena travel the Crooked Creek Corridor 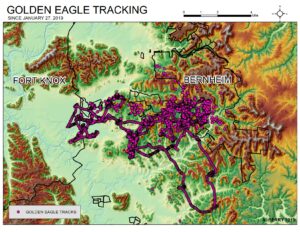 A special thanks to everyone who voted for the naming of our female golden eagle – Athena was the winner.  She is moving with Harper, the male golden eagle, throughout Bernheim, giving us a fantastic look at detailed flight patterns. For the first time this year we have seen the golden eagles moving further, traveling through large forest blocks.

We can say with great certainty that the two golden eagles seem to be working together. Harper and Athena are traveling together, moving throughout the Greater Bernheim area. They have roosted and flown together throughout February with a few periods apart during days of extensive soaring. Questions still remain with migration about three weeks away. Will they travel together during migration and end in the same location?

On February 8, we saw the golden eagles in the arboretum in the Guerilla Hollow area. We know Athena moved among trees and landed in the Virginia pines just 100 feet behind the Grigsby Shelter in the Children’s Play Garden. She then moved to the forested area just south of Lake Nevin. Though their stay was brief, just 30 minutes in Guerilla Hollow, this is the first documented golden eagle ever for the Bernheim Arboretum.

On February 16, we saw them cross Interstate 65 for the first time this winter. Both Harper and Athena headed west into Fort Knox traveling along the Crooked Creek Corridor, which includes large forest blocks and knobs spanning between Bernheim, Knobs State Forest, and Fort Knox. This corridor is a critical link between Bernheim and Fort Knox and is important for movements of wildlife.

During the trip throughout the Crooked Creek Corridor, the golden eagles spent time at the Kentucky Natural Lands Trust Crooked Creek Protected Area. They spent a few hours in a mature bottomland forest and then roosted for the night on the property along the edge of a knob. This is an excellent example of them using protected areas for roosting and possibly hunting. Their three hours of movement throughout the mature bottomland forest may indicate pursuit of turkey or other prey, which I have personally seen to be numerous in that location.

Their travels also took Harper south of the Bluegrass Parkway near Pinnacle Knob, an area he visited in 2015. Much still to be interpreted from their winter travels. It is hard to believe that in about three weeks these eagles should be migrating north towards Canada. Stay tuned for updates on their activities during their late winter stay at Bernheim.