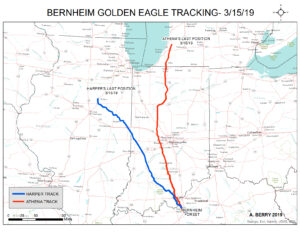 On March 14 we saw Athena, the female golden eagle, fly over South Bend, Indiana on her way towards Michigan. As she approached the Michigan state line, she was traveling at 55 miles per hour on a northern course.  She continued heading north and is now 8 miles from the eastern shore of Lake Michigan. On March 14, she peaked at 68 miles per hour at around 2 P.M., when it looks like winds were really picking up in that area. Between 1 and 3 P.M., her speeds were all above 40 miles per hour and there were no ascents, just straight line flight. Now she is just west of Kalamazoo, Michigan and headed towards Grand Rapids. It is exciting to see a new migratory course and follow her as she moves her way north through Michigan.

Harper’s location is similar to his previous tracks from 2015 and 2018. He was last located on March 15 on Rooks Creek of the Vermillion River. The Vermillion River is a destination he visited on previous migrations, so he seems to be right on course. Being at least 10 years old now, Harper clearly knows his routes and has flown over several of his protected stopovers during the past few days. Tracks in Indiana show he visited Crane Naval Base again, a location he has flown over three times now during migrations.

I was able to locate his stopover at 3:00 PM on March 12 using Google Maps Street View. It is an agricultural area, seen in summer image as cornfield and soybean. He roosted in the large tree located in center of picture of what looks to be the yard of an abandoned house and barn. Very large expanses of farmland in this section of the Illinois with few opportunities for good resting spots. This is definitely not a place where you would expect to see a golden eagle but goes to show that you should never doubt what you might see and never discourage someone who claims to have spotted a golden eagle in a seemingly out of place location.

It seems these two golden eagles are headed in separate directions. Now 180 miles apart, areas for golden eagles to cross the Great Lakes expanses are few, and we may see Athena head up towards Mackinaw City for her crossing while Harper is likely headed past Duluth, Minnesota. From there it will be exciting to see which direction Athena goes in Canada, headed either to the west or east of Hudson By. If she heads west there is still a slight chance they could end up in the same location near Churchill.

So, a few big questions in my mind. First, will these two winter companions now move to breeding grounds and reunite with other mates? Golden eagles are supposed to be monogamous, but really little is known about these mysterious and hard to study birds. And if they do have separate breeding grounds and mates, will they come back to Bernheim and reunite next winter to defend territory and hunt together? I have a strong belief that Harper and Athena have been hanging out together at Bernheim for many years from my direct observations in the field and trail camera images. But I have been wrong before, stay tuned as we continue to follow an epic migration with a long way to go.