You are here: Home / Bird Research / Harper and Athena begin their northern migration 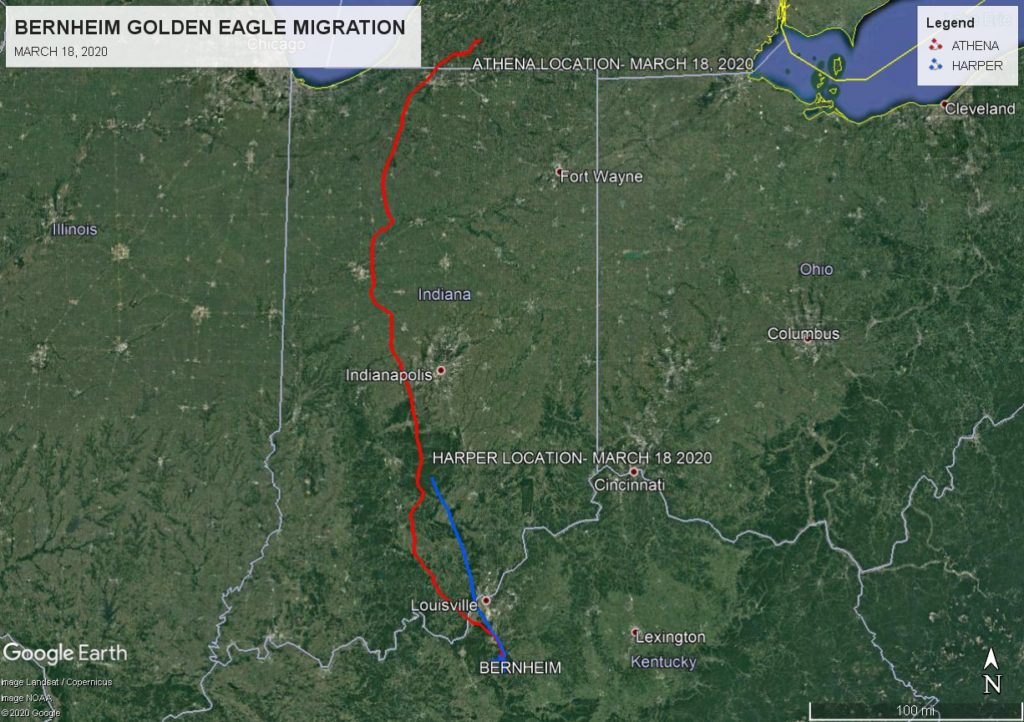 We hope everyone is a faring well on this first full day of spring! We are excited to announce that Harper and Athena, the pair of golden eagles Bernheim has been tracking, have now begun their spring migration back to Canada for the nesting season. Over the next month, they will travel 1700 miles to arrive back at their nesting location, and if all goes well, reunite and prepare for nesting season in the frozen wilderness of northern Manitoba.

Athena was the first to head north out of Bernheim on March 13, 2020. She flew over the Cedar Grove Wildlife Corridor and west Louisville before exiting Kentucky. Harper delayed his departure by a few days, finally headed out on March 17, 2020 traveling north over Cedar Grove Wildlife Corridor and eventually over the Shively neighborhood in Louisville. Both golden eagles were over 1000-foot-high as they crossed west Louisville and into Indiana where they picked up the knobs and traveled north toward Bloomington.

This year was a bit different than the spring migration 2019 when Harper and Athena departed Bernheim on the same day within hours of each other, March 11 2019, on different paths headed north through Indiana. This year Harper traveled widely after Athena departed, continuing to visit his favored locations.

As of this morning Harper was still in centralIndiana, while Athena has crossed into southern Michigan. Stay tuned for additional updates as strong winds push them on their spring migration. Thanks to all as we continue to follow these magnificent golden eagles.