You are here: Home / Actions Beyond Our Borders / Great Horned Owl rehabbed and released 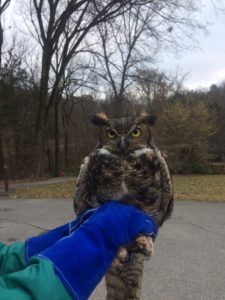 Bernheim Arboretum and Research Forest is home to all kinds of wildlife, including many hawks and owls. Even in their natural surroundings, these raptors sometimes become injured. Who you gonna call? RROKI!

Last July, an injured Great Horned Owl was found at Bernheim near the silos by the Education Center. The bird was transferred to Raptor Rehabilitation of Kentucky, Inc. for care. The Federal Migratory Bird Treaty Act, which celebrates its 100th anniversary this year, protects all birds and RROKI is licensed to care for them. This bird had an injured foot and spent several weeks in the hospital until it healed. After a few more weeks in a flight enclosure gaining strength, the bird was ready for release. Great Horned Owls begin their courtship season in November, so it was important to get this bird home again as soon as possible in case he was returning to a mate.

The Great Horned Owl is one of the most common raptors in North America. It can live in varied ecosystems from deserts to wetlands to forests like Bernheim. They don’t build nests; they steal them from other birds such as hawks, crows, ospreys and even Bald Eagles! Their eggs hatch in January and they are usually ready to fly and begin hunting by March. They are strong enough to pick up and fly away with an animal three times their own body weight, so a 4 pound owl could easily fly away with your 12 pound dog or cat. No other bird can do this. 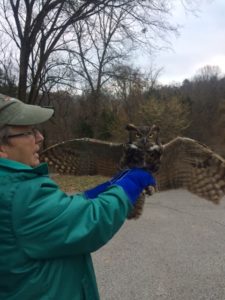 Raptor Rehabilitation of KY, Inc. is a non-profit, volunteer based organization which has been actively working with raptors such as eagles, owls, hawks, falcons, vultures, ospreys and kites since the 1980’s. In 2017, they set a record by admitting 381 sick, injured and orphaned raptors for treatment. Between 60 and 65% of these birds are returned to the wild again. They are supported entirely by donations, and receive no funding from the government.

Kathy Dennis (wife of Volunteer Naturalist, Dick Dennis) has volunteered at RROKI for nine years, and agreed to bring the bird back for release. As dark descended, she took the bird from its carrying crate, and after a few photos by Bernheim staff, it quickly flew back into the woods. If you hear an owl hooting behind the Kingfisher Pond, it may be GHO 18-221, happy to be home again!