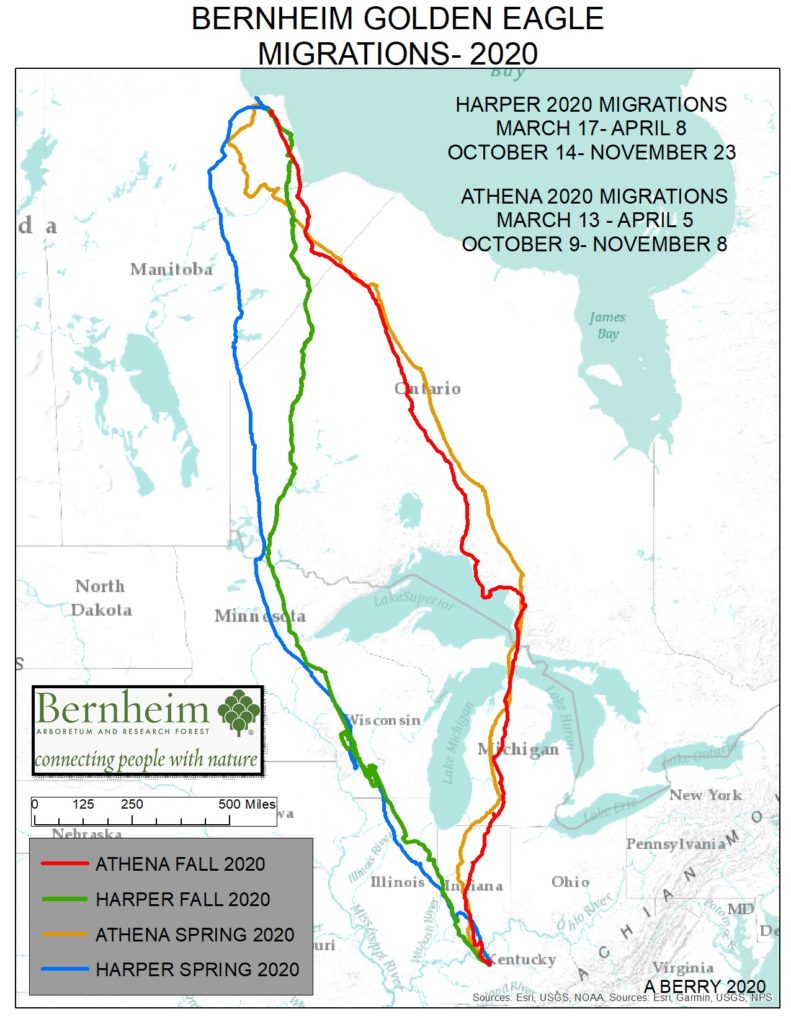 Special thanks to Beckham Bird Club, Cellular Tracking Technologies, Conservation Science Global Inc., and all the supporters of Birds of Bernheim that make this incredible project possible.  We are excited to announce that as both golden eagles have now successfully made it back to Bernheim from their summer range in Canada.

Harper, the male golden eagle tracked from Bernheim, returned on November 23, 2020. His 40-day migration was longer than his female companion, Athena’s, which was 30 days on the wing, but the end destination at Bernheim was the same as we have documented for this golden eagle since 2015. 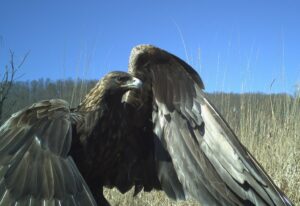 Harper showed no hurry in making his way back to Bernheim. Athena returned on November 8, while his location was still in western Wisconsin in the lower Black River watershed. After coming to the expansive midwestern agricultural lands near Madison, WI on November 6, he had turned around and headed back north for 120 miles. 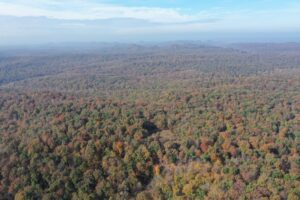 Extended stopovers in western Wisconsin have been common for this male golden eagle on both spring and fall migrations. The rugged Driftless Area that extends northwest of Madison seems to hold special significance to Harper and other migratory golden eagles and raptors that are well documented in that area. It marks the edge of the rugged northern wilderness, and probably a good place to rest and refuel for the migration ahead. It was not until November 17, after 17 days spent in western Wisconsin, that he began the final leg of his journey across 400 miles of unfriendly midwestern agricultural lands towards Bernheim.

He came very close to Chicago on his migration November 18th, traveling along the Illinois River just 20 southwest of Joliet, IL. This is a route he knows well, as he has used the narrow-forested areas along waterways outside of Chicago to navigate in previous years. Once across the midwestern agricultural lands, he stopped near Solsbury, IN at the same location he has passed over four times since 2018. He has roosted overnight there twice in past three years and sometimes veers off his course to head directly into the location.  It is certainly a spot he remembers and perhaps its location near the edge of the midwestern agricultural lands makes it a preferred resting place. 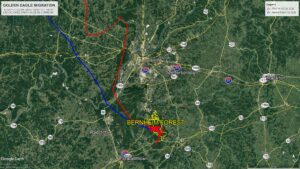 His final approach to Bernheim across Indiana was fast, taking just four days. He passed through some more familiar territory, flying through Crane Naval Base and Hoosier National Forest as he pushed on southeast. Just before noon on November 23, Harper crossed the Ohio River at West Point, KY traveling 53 mph at 2,126 foot above the earth’s surface. A few weeks before Athena had crossed the Ohio River less than one mile upstream.

Their approach to Bernheim from there was similar, heading across Fort Knox and through the Crooked Creek Wildlife Corridor via Knobs State Forest then directly into the Wilson Valley of Bernheim.  By now we can assume these two golden eagles have reunited, although Athena has not checked in for a few days, so we cannot be sure of how the reunion went. Stay tuned for upcoming details of their activities now that they’re back in Bernheim. We will also talk more about their incredible migrations as we start to process the data more thoroughly.