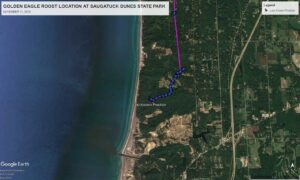 The golden eagles are moving steadily south towards Bernheim along with the arctic air mass. Harper, the male golden eagle ,flew over 260 miles during a 24 hour period on Nov 10-11 with speeds topping out at 74 miles per hour and heights of 3795 feet as he traveled across Wisconsin and Illinois. Wind gusts of 33 miles per hour propelled Harper on a day when flying speeds of over 50 miles per hour were common for extended periods. Its hard to imagine flying over 50 mph in 24 degree temperatures for most of the day! That’s just one of the many skills that make golden eagles successful on their long migration to Bernheim.

Athena has been traveling a bit slower, and her tracks show she is now moving directly south through Michigan. She roosted on November 11, 2019 at Saugatuck Dunes State Park just ¼ mile from the shore of Lake Michigan. Again, we see golden eagles using protected forests as stopovers during their migration for roosting and possibly hunting.

Navigating the midwestern United States for a golden eagle is challenging. Stopovers for migrating birds are diminishing every year because of forest fragmentation and development. Natural lands in the Midwest are becoming smaller and smaller, and linkages between the forested lands more impossible with each passing year. As I often do with stopovers, I searched Saugatuck Dunes to learn more about the location and its protection. Information online shows an ongoing fight against development that threatens this protected area. These threats, as with the proposed LG&E pipeline that would cut through Bernheim, are a big part of the reason golden eagles have so little suitable habitat remaining in eastern United States.

These golden eagle stopovers and core habitats of large forest blocks need protection. It’s not just eagles, but other songbirds, bats, and butterflies that depend upon these forests during their long migration and on their end destinations. Without protected areas, their existence becomes much more imperiled. Stay tuned as we await the golden eagles’ arrival in Bernheim as early as this weekend!