We are continuing to track Harper during his winter stay at Bernheim. Lately he has been seen with a companion in the Wilson Valley and his travels have been between Bernheim and Knobs State Forest. We have sighted other golden eagles as well, with at least 5 individual birds documented so far this winter. Harper continues to stay within the large forest blocks and continues to avoid humans. Below, we look at how historical interactions between golden eagles and humans may have shaped the behavior of avoiding residential and developed areas.

It is easy to see why humans have long revered apex predators for their prowess, stealth, and mystique. The golden eagle is no exception with its incredible hunting abilities and secretive lifestyle.  Perhaps heralded more than any other animal, the golden eagle is found on flags and emblems across the world. Revered, persecuted, and a source of mystery and mythology, the golden eagle has evolved and adapted to coexist in an increasingly human dominated world. Humans are both competitors and predators of golden eagles, competing for the same food sources and preying upon the eagles for plumage, ornaments, and dominance of resources. Eagle-human interactions have been documented going back at least 130,000 years to Neanderthal deposits from caves in Europe. Encounters with humans were often negative for the eagles, and likely formative in the intense habitat partitioning we see today, especially with the eastern golden eagles. 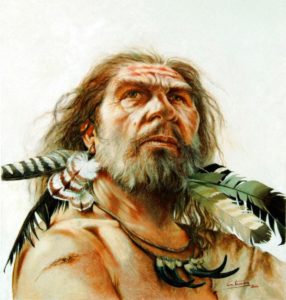 Many countries and cultures developed a relationship with golden eagles due to their wide global range across Europe, Asia, North Africa, and North America. The earliest evidence comes from European Neanderthal usage of golden eagles and other raptors during Paleolithic era, but the practice likely extends much further into the past. Recent archeological evidence documented in publications has shown Neanderthals likely used eagle feathers for ornamentation. Golden eagle talons were likely used to create necklaces, as talons and wing bones in cave deposits were found to be processed with tools. These finds, which demonstrate extensive use of golden eagles and other raptors, are one of the keys to understanding interactions between golden eagles and humans. Quite possibly the Neanderthals revered and worshiped golden eagles as in other cultures continuing to the present.

In North America, human interactions with golden eagles date back at least 14,000 years. Migrants who crossed the Bering Land Bridge from Asia likely brought the earliest traditional ideas and usage of golden eagles. Tribes of Native Americans in all parts of the continent utilized golden eagle symbols, feathers, and talons and revered the species as having supernatural abilities. In the western United States, recent work at the Draper Museum of Natural History has shown that Thunderbird petroglyphs in Wyoming were likely associated with golden eagle nest sites that are still occupied today. Thunderbirds were legendary creatures believed to have the ability to bring thunder and lightning. It is very possible the thunderbird myth was based on golden eagles, and that these petroglyph sites marked areas where eagles were trapped for feathers or for worship.

Tribes of the Midwest and Great Lakes region used golden eagle feathers for headdresses, to decorate religious and spiritual items, and for trade and status. During the same period, people were carving raptor petroglyphs and using the Thunderbird symbol in designs. After learning of the possible association of Thunderbird with tribes in the Rocky Mountains, I remembered similar petroglyphs found in the Mississippi Valley that depicted raptors. Many of these thunderbird symbols and petroglyphs are similar to that of golden eagle. What association might have the Mississippian tribes and Southeastern Cultural Complex had with the midwestern golden eagles? In our next installment we examine the history of Golden Eagles with Native American tribes, including ideas on how Mississippian and Great Lakes Tribes may have interacted with the midwestern golden eagles like Harper.