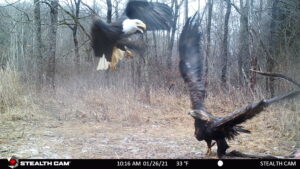 Spring migration has begun as both golden eagles departed Bernheim within a half hour of each other on Saturday, March 6, 2021. This is the earliest departure date so far of the 8 individual spring migrations tracked for this pair, with timing having ranged between March 6 – March 17. They followed a path just southwest of Louisville, both heading directly over Jefferson Memorial Forest and crossing the Ohio River at Cane Run Road. This year seemed to be a coordinated departure, with the path nearly overlapping in some areas as they flew into Indiana 30 minutes apart. We will update progress regularly during migration on their travels as they cross the Midwest and head towards Canada. First, let’s wrap up what we learned during their winter stay at Bernheim.

The winter months of 2020-2021 flew by and the golden eagles successfully made it through another stay at Bernheim. These golden eagles began migrating south in October and arrived mid- November. They come for the large interior forests that provide security, hunting, and scavenging opportunities. Forests like Bernheim in the eastern United States are essential for allowing these apex migratory predators to escape the harsh snow and ice conditions found during winter on their breeding grounds in Canada. 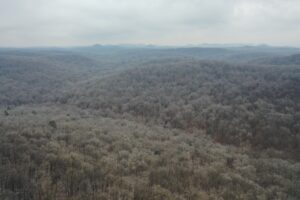 These golden eagles continued to display high site fidelity, with each eagle utilizing the same locations this year on their winter range at Bernheim. Within their territory, the same trees, ridges, and vantage points were used for perching, hunting, and roosting. When they travel, they often followed routes that allow them to stay over or near large forests and familiar territory. The eagles made trips to forested knobs that surround Bernheim including Knobs State Forest and other privately owned tracts. These locations are clearly visible on the horizon to the soaring eagles from Bernheim. The furthest they ranged this winter was a brief flyover to knobs south of New Haven on the Rolling Fork River 17 miles from Bernheim.

Bernheim recently participated in the Eastern Golden Eagle Working Group meeting. A collaboration of biologists and wildlife managers from the United States and Canada, the working group is dedicated to developing a more complete understanding of golden eagle life history and ecology throughout eastern North America. Topics this year included wind energy, with several talks focusing on its impact on eagles and other bird species. Technological advances are allowing for larger rotors and higher altitude turbines, opening new areas once unsuitable for wind energy in the Midwest and Appalachians. The golden eagles of Bernheim have already experienced recent increases in wind turbines along their migratory routes in Indiana, Illinois, and Michigan.

Stay tuned as we follow their migration north towards Canada and the great northern wilderness. We will highlight stopovers along the way, perils in crossing the Midwest, and the passing of the Great Lakes in Minnesota and Michigan. A special thanks to Beckham Bird Club, Cellular Tracking Technologies, Conservation Science Global Inc., and all the supporters of Birds of Bernheim that make the golden eagle project possible. The support from Bernheim’s members, volunteers, staff, and donors are what allow us to protect wildlife and steward their habitats.