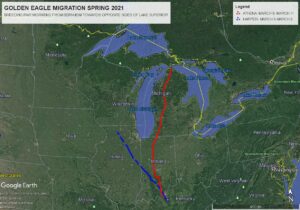 The Mackinac Straits Raptor Watch (MSRW) was eagerly awaiting as Athena headed north towards the crossing of the Great Lakes. Observers were able to document her location on the morning of March 12 as she departed her roost. We coordinated this week with MSRW as Athena approached, as last fall they were able to see her migrate south over this heavily used and important migratory bird route. This route is critical for migration of raptors and other birds that do not cross the open water of the Great Lakes. By now she has likely crossed the Mackinac Straits into the Upper Peninsula and may be entering Canada by evening. We greatly appreciate coordinating with this important group of researchers that help steward the Mackinac Straits migratory corridor.

To recap the migration so far, on March 6 the golden eagles split paths just south of Bloomington, IN and headed on their usual routes. As we saw in previous years, this pair of golden eagles is now migrating separately towards opposite sides of Lake Superior. Let us catch up their movements as they continue to fly north towards Manitoba.

March 6
Athena left Bernheim and flew over 110 miles of familiar knobs terrain in Indiana before entering Brown County, Indiana. Brown County is a common destination for Athena, with usage of the large forests in several previous migrations. She roosted that night at Morgan-Monroe State Forest and roosted within interior forest.

March 7
She flew within 20 miles of downtown Indianapolis at heights of 2500 foot above earth and at speeds over 40 miles per hour. Strong winds carried her quickly over the open agricultural lands to roost that night in a small woodlot just 4 miles north of Notre Dame University in South Bend, Indiana.

March 8
Heading out at 8 a.m., she flew north over Grand Rapids, MI. After she stopped to roost for the night near Chippewa Lake just east of Big Rapids, Michigan.

March 9
Athena roosted 20 miles east of Traverse City, grounded by rainy conditions. She was just 65 miles southwest of the Mackinac Straits, and high winds over 40 mph to propel her quickly.

March 10
Athena stayed put all day with rainy weather. She did not move from her location near Seven Bridges Nature Area in northern Michigan.

March 11
High winds with gusts up to 50 mph forced Athena to be grounded with a few miles of the Mackinac Straits crossing.

March 6
Harper flew 120 miles from Bernheim and roosted in Owen-Putnam State Forest, an area he has frequently uses as he migrates across rugged forested land in Indiana that includes Hoosier National Forest.

March 7
The next day he traveled 170 miles to roost along the Illinois River in a familiar area just west of Seneca, IL. He has been navigating this area since we started tracking him in 2015. Forested riparian areas are preferred stopovers for golden eagles as they cross the midwestern agricultural lands.

March 8
He only traveled 30 miles and stopped in a very small woodlot for roosting. Located in the middle of open farmland, again we see small, unprotected woodlots playing an important part for golden eagles and other species of migrating birds.

March 9
Last check in was 15 miles southwest of Rockford, IL. During this stretch, we have seen Harper fly at some of his highest altitudes of the migration. There are only 70 miles to go before reaching the Wisconsin Driftless Area, an area he often makes stopovers during migration. With entrance to the Driftless Area, which lies at the northern edge of the arduous midwestern agricultural crossing, Harper begins to enter the northern wilderness on his way towards Canada.

From here the golden eagle check ins become less reliable, so stay tuned while we continue to piece together this incredible journey back to their breeding territory in northern Manitoba.