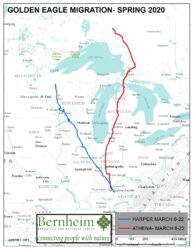 Last time we told of Athena’s migration to Mackinaw City, MI. With some coordination, Jim Bricker of the Mackinaw Straits Raptor Watch was able to take some incredible photographs of Athena in flight. One image provides a silhouette, with feathers and markings visible down to the tip of the beak. It shows her as a healthy eagle that can navigate the 1700-mile migration.

Athena crossed the Straits of Mackinac on March 12 – one of 75 golden eagles counted that day. This large number represents the second highest one day total for the Mackinac Straits counters. She has since traveled over 300 miles from Mackinaw City into Ontario. She last checked in 70 miles north of Lake Superior near Klotz Lake Camp. Her movements have been very deliberate, with a top speed of 94 miles per hour and greatest altitude at nearly 4,000 feet above the surface.

Harper has not flown as fast, but has several times still traveled over 50 miles per hour and to heights of 3,900 feet above the surface.  After experiencing bad weather of high wind, an ice storm, and snow, he made some stops in Wisconsin, again visiting the Driftless Area for an extended period of days. His movements indicate that he was possibly hunting, with one sequence clearly demonstrating techniques unique to raptors such as golden eagles. In this situation, we observed a 2,000-foot descent onto a location he had previously been scouting after spending nearly an hour circling high above.

With many miles to go before they arrive in their nesting territory, both golden eagles will be traveling snow- and ice-covered boreal forests for the remainder of their trip.  We expect they may arrive during the first week of April, possibly earlier. Stay tuned as we continue to follow this migration from Bernheim to the Hudson Bay lowlands.