You are here: Home / In the News / ‘Forest Giants’ officially invade Bernheim Forest

Dambo wrote a “fairytale” for the giants called “While the Weather Got Better”. The poem provides a backstory for the new “family” living in Bernheim.

The “mother giant”, known as Mama Loumari, is expecting a new baby and rests against a tree in the Bernheim Forest. Her two children, Little Nis and Little Elina, take their time exploring the forest’s pools and rocks.

In the fairytale, the patriarch of the family is Isak Heartstone, another one of Dambo’s sculptures. Heartstone was originally placed in Breckenridge, CO but was eventually removed after the community complained about the mass of visitors flocking to see it.

“His two beautiful children, little Elina and Nis/ And their mama Loumari, a hug and a kiss/ They spend the winter together while the weather got better/ Elina looked at the sky, from the sky fell a feather,” The poem says. 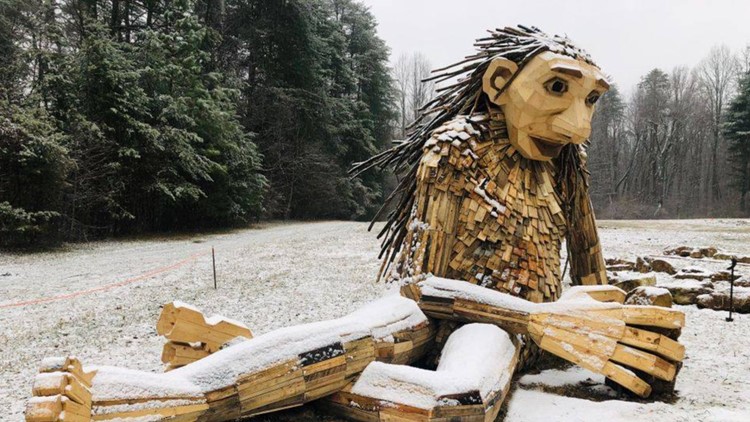 That feather, according to Dambo, is a sign of “good luck” and “a fertile forest” – good signs for the little baby boy that Mama Loumari is expecting.

When winter ends, Heartstone must head back to the mountains, so he bids farewell to his family in the forest.

“I will be back again soon, he yelled, walking the prairie.”

Bernheim’s Forest Giants are expected to remain in place for at least 3 years.

Thomas Dambo, based out of Copenhagen, was inspired by the “potential in all the stuff that people threw out” while he was growing up. After attending a design school, he began constructing unique sculptures from recycled materials.

His art has been featured all over the world. He has created dozens of “forest trolls”, hundreds of birdhouses, and what he calls “Happy Walls”, installations of colored wooden blocks that can be customized to create all kinds of murals.

He also has several design projects, including furniture and interior design, that are primarily made with recycled materials

One of his works from 2018, Leo the Enlightened, is hidden within the Smoky Mountains of Tennessee.

According to Dambo, Leo was built using scrap wood, and his necklace was made from lumps of sick trees.

Dambo documents each of his projects through YouTube videos and social media posts. He also has several galleries of his work on his website.

Full Text of “While the Weather Got Better” by Thomas Dambo:

It was a cold winter, but the snow felt warm

He woke up with eyes closed and heard himself yawn

His name was Isak Heartstone, on mountain top of them all

A name they gave him as small, now he was 36 feet tall

Already a father to two, full of eyes, full of tears

Full of love he was, but felt alone on the mountain

He walked down to the forest, in the forest he found them

And their mama Loumari, a hug and a kiss

They spend the winter together while the weather got better

Elina looked at the sky, from the sky fell a feather

It was a sign of good luck, and a fertile forest

Where every being had a place from the smallest to tallest

They made a circle of life, they would soon have a brother

It’s good luck for a baby, when it sleeps in the mother

Some of quarts, some of leaves and what fell from the trees

It was a symbol of strength, so the baby would grow

A hug and a kiss, Nis, Elina, Loumari

I will be back again soon, he yelled, walking the prairie