You are here: Home / In the News / Flying goats, chile duel, ’99 Women’s World Cup statue: News from around our 50 states 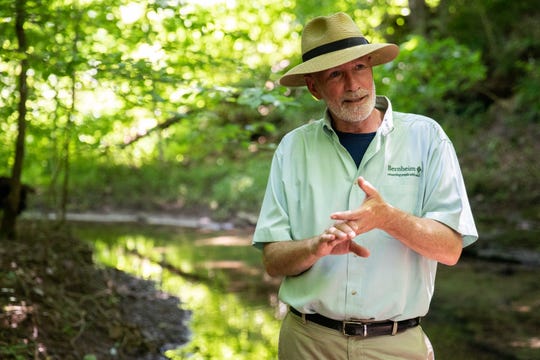 Mark Wourms discusses the threat of LG&E’s pipeline project in the spot where the proposed pipeline would be built Tuesday at Bernheim Forest in Clermont, Ky. (Photo: Michelle Hutchins/Special to Courier Journal)
Clermont: Louisville Gas and Electric Co. wants to build a natural gas pipeline to feed the growing energy needs of Bullitt County, but some area property owners – including Bernheim Arboretum and Research Forest – are pushing back. LG&E is preparing to go to court in an attempt to take control of the land it wants through eminent domain. Bernheim’s executive director, Mark Wourms, says the nonprofit won’t accept that without a fight because the pipeline would cut through an area that’s home to endangered Indiana bats and two species of extremely rare snails. “It’s just insane to intentionally impact rare animal habitats,” he said. “Is it an uphill battle? Sure it is … and we think it’s better for Kentucky if we don’t (stop fighting).” The Bernheim Forest covers more than 16,000 acres about 25 miles south of downtown Louisville.