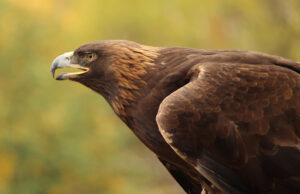 As winter arrives, birds are beginning their southern migrations. Among the many birds that will make their way to Clermont are golden eagles. Nearly one year ago, Bernheim (in partnership with Kentucky Department of Fish and Wildlife and the Beckham Bird Club) was able to fit Harper Bernheim with a solar powered GPS tracking device. We had hoped to track him for several years, but as often is the case in nature, Harper had his own ideas.

Throughout the spring, Bernheim tracked Harper north, where he found his spring home in Canada, in the Churchill areas along Hudson Bay. Suddenly, the transmissions stopped, leaving his whereabouts a mystery to those watching him closely and disappointing to all those who were hoping to learn about these magnificent raptors from a large set of data. What had happened? How could he have shed the tracking device? Is he still alive?

As we inch toward the colder months, we are hopeful that Harper is not only still alive, but that he will return to his winter home deep in the forest at Bernheim. It’s highly possible that his mate may have helped remove the device, which went silent as it hit the dark forest floor, no longer receiving enough sun to power it.

As of November, two golden eagles had already been spotted inside Bernheim, so we know the migration has begun. We will be monitoring trail cameras at feeding areas, watching for Harper by looking for his leg band. Even in his short time being monitored, Harper provided us with an incredible amount of information. Before his northern migration, we learned his habitats within Bernheim – he stayed within the knobs, covering 55 square miles. His avoidance of populated areas added to our understanding that golden eagles may require large blocks of natural land during winter.

Kate Slankard, avian biologist for Kentucky Department of Fish and Wildlife, said Harper mapped a new migration route north, one that was “very different from any of the other golden eagles tracked in the eastern or western United States. Harper was likely nesting in an area of Manitoba where little research has been done on golden eagles and certainly none linking this population to those wintering grounds.”* You can read about his journey here.